About the First Year Project

About the First Year Project

At a moment when political partisanship and rancor is most acute, when America has emerged from one of the nastiest presidential battles ever, the nonpartisan Miller Center at the University of Virginia is showing a better way: Republicans and Democrats pulling together to help the new president lead the most effective first year possible.

That's the essence of the First Year Project, an ambitious effort devoted to a president’s make-or-break first year. The project focuses on the key issues the new president must confront, viewed through the clarifying lens of history and amplified with actionable policy prescriptions from prominent scholars and experts at the Miller Center, the University of Virginia, and beyond.

The premise: A new president can best look forward by first looking back, at the successes and failures of his or her predecessors.

Since the project's launch in October, 2015, more than 60 deeply-researched essays have been published on the kinds of urgent issues the president will confront in such areas as national security, fiscal policy, immigration, the vanishing American dream, infrastructure, the global economy, and race relations.

What distinguishes the project is not merely the quality of the scholarship but its nonpartisan nature, in keeping with the founding principles of the Miller Center.

Republicans and Democrats, conservatives and liberals have all contributed materials to the First Year Project. Dozens of current and former members of both Democratic and Republican presidential administrations have participated in First Year panels, events, and roundtable discussions.

The First Year Project has directly reached hundreds of Washington, D.C. influencers. For example, Michele Flournoy, former undersecretary of defense for policy in the Obama Administration, contributed a First Year essay and participated in a First Year panel discussion in Washington.

"I think this project is incredibly important for whoever the next president is, Republican or Democrat," Flournoy said last year, before the election. "It allows us to actually learn from history: What have other presidents encountered on national security in their first year, how did they handle it and what should we learn from that? Drawing from that history and looking forward, to understand how might the next president be better prepared to deal with the inevitable challenges that will come in the first year, is an incredibly valuable service."

Meanwhile, major media have recognized the value of the First Year Project's "scholarship in the public interest." U.S. News & World Report, the Washington Post,  Fortune, POLITICO, and the Atlantic, among others, have all published First Year essays or op-eds.

Feature on the First Year Project 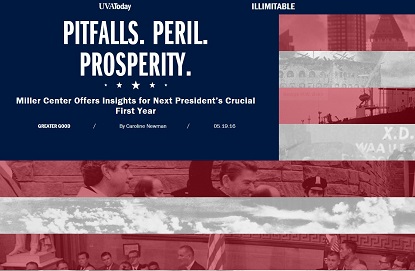