The Miller Center’s Governing Council and Foundation Board, at their joint meeting in April 2014, resolved to create the Holton Society as a way to recognize longstanding friends and supporters who have dedicated their time, talent, and treasure to support the work of the Center.

The creation of the Holton Society is a tribute to him, but also honors former Council members and dedicated friends, whose interest and expertise have sustained the Miller Center over the course of its history. 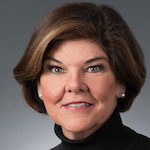 Ann Compton began her distinguished career in journalism as the first female reporter for WDBJ TV, a CBS affiliate in Roanoke, before being hired by ABC news in 1973. By the next year, she became the first woman assigned to cover the White House on a full-time basis by a network television news organization. During her time in the White House, she covered seven different administrations, served on the panel of two presidential debates, and covered both the Republican and Democratic conventions in 1976. Compton was the chief Washington correspondent for ABCNEWS.com, where she wrote and anchored a daily political column. In 2014, she retired from ABC News, 41 years to the day after she began at the network. 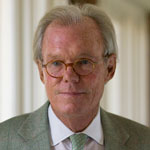 Terrence D. Daniels has been a partner with Quad-C Management, Inc., a private equity firm based in Charlottesville, since its formation in 1989. Prior to founding Quad-C, he served as a vice chairman and director of W.R. Grace & Co. He also had operating responsibility for Grace's Specialty Chemical, Health Care, Retail and Restaurant, Natural Resource and Corporate Technical Groups. Daniels also served as chairman, president, and CEO of Western Publishing, and senior vice president for corporate development of Mattel. He holds a BA from the University of Virginia and an MBA from UVA's Darden School of Business. 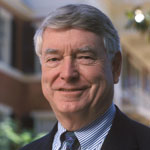 Eugene V. Fife is a former partner at Goldman Sachs where he was chairman of Goldman Sachs International and a member of the Management Committee. He remains a senior director of Goldman Sachs. Fife is the founding principal of Vawter Capital LLC, a private equity firm in Charlottesville. He currently serves as a member of the board of directors of Cequel Corporation and of Accudyne Industries. He is a senior advisor to BC Partners. He received  his bachelor of science degree from Virginia Tech and his MBA from the University of Southern California. 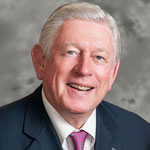 Daniel K. Frierson is the president and chief executive officer of the Dixie Group, an international manufacturer of carpets based in Chattanooga, Tennessee. Frierson also serves as a director of Astec Industries, Inc., an equipment manufacturer for aggregate processing, asphalt road building, and pipeline and utility trenching. 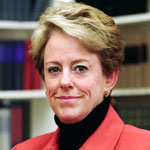 Claire W. Gargalli is a retired corporate and international banking executive. She previously served as vice chairman and partner at Diversified Search Companies in Philadelphia, and as president, chief operating officer, and director of Equimark Corporation. Gargalli is a member of the board of Praxair, Inc., serves as the chair of the UVA Heart & Vascular Center Advisory Board, and is a trustee emeritus of Middlebury College and Carnegie Mellon University. 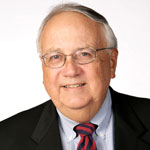 David Goode is the retired chairman, president, and CEO of Norfolk Southern Corporation and is a former member of the Miller Center’s Governing Council. A graduate of Duke University and Harvard Law School, he has been director of various companies, including Caterpillar, Delta Airlines, Georgia-Pacific, and Texas Instruments. Goode has served as a trustee for the Virginia Museum of Fine Arts, the Focused Ultrasound Foundation, and the Thomas Jefferson Foundation, which owns and operates Monticello. The Norfolk Southern office building in midtown Atlanta was named in his honor in 2005. 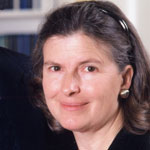 Elsie Wilson Thompson is a graduate of Radcliffe College and UVA Law School, where she also coached UVA Women's Crew for its first two racing seasons. She practiced antitrust, mining, and corporate law in New York and Houston before returning with her family to Charlottesville. She is a founding director and past president of the Boys & Girls Clubs of Central Virginia, director and past president of Charlottesville’s Paramount Theater, co-vice chair of UVA’s Fralin Museum Advisory Board, director of the Foundation of the Virginia State Arboretum, and co-chair of the Harvard Club of Charlottesville. 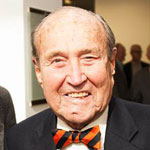 Mortimer Caplin, a UVA School of Law professor emeritus, was also a senior partner of Caplin & Drysdale, one of the nation's leading tax firms. He taught tax law at UVA from 1950 to 1961, while serving concurrently as president of the Atlantic Coast Conference. He was the commissioner of the Internal Revenue Service from 1961 to 1964, and on his departure, the Treasury Department presented him with its Alexander Hamilton Award for "outstanding and unusual leadership." Caplin graduated from UVA’s College of Arts & Sciences in 1937 and the School of Law in 1940, where he was editor-in-chief of the Virginia Law Review and the top student in his class. 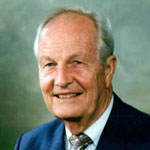 John W. Galbraith was the vice-chairman (1986-91) of Templeton, Galbraith, and Hansberger, Ltd., an investment firm that in 1992 merged with Franklin Resources to form the Franklin Templeton Group (now known as Franklin Templeton Investments). He served on the Miller Center’s Governing Council and Foundation Board from 2002 to 2007. Galbraith was the chairman of the Florida International Museum and a trustee of Eckerd College in St. Petersburg, Florida. He and his wife Rosemary were honored for their philanthropy in 2008 when the Miller Center’s Forum Room was named in their honor. 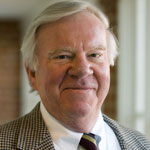 Joseph R. Gladden Jr. was a former executive with the Coca-Cola Company. As executive vice president and general counsel at the time of his retirement from a 16-year career there, Gladden had responsibility for the worldwide legal function of the company. Before joining Coca-Cola in 1985, he spent 17 years with the law firm King & Spalding. An alumnus of the University of Virginia School of Law, Gladden earned an LLB degree and was on the board of directors of Emory Healthcare and the University of Virginia Physicians Group. 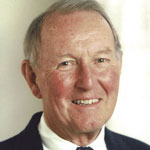 Andrew D. (A.D.) Hart, Jr. was a member of the Miller Center Foundation Board and the Miller Center Governing Council from 2002 until 2012. He was a founding partner and advisory director of Russell Reynolds, a global recruiting firm, from which he retired in 1998. Hart also held management positions with Westvaco Corporation and Federal Paper Board Company. 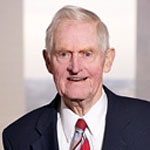 A. Linwood Holton, Jr. was governor of Virginia from 1970 to 1974. He was a member of the government relations team for the Richmond, Virginia-based law firm of McCandlish Holton PC. Governor Holton served previously as president of the Center for Innovative Technology, vice president and general counsel of the American Council of Life Insurance, and as a member of Amtrak's board of directors. He was also a former chair of the Metropolitan Washington Airport and the Republican Governors Association. He was chairman emeritus of the Miller Center Governing Council. 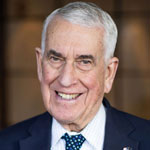 Leigh B. Middleditch, Jr. was counsel in the Charlottesville office of law firm McGuireWoods LLP and vice president of McGuireWoods Consulting LLC. Middleditch, a graduate of the University of Virginia and its School of Law, had served on the University's Board of Visitors and as legal advisor and special counsel to the University. He was also active in the American Bar Association, having served as chair of the exempt organizations committee of the tax section, chair of the senior lawyers division, and as a member of its board of governors. He was chair of the Miller Center Foundation Board. The Center recognized Middleditch for his philanthropy and dedication in 2011, when it named the hall outside the Center's library in his honor. 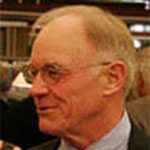 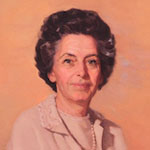 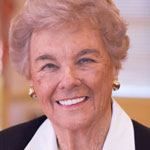 Anne R. Worrell was a former newspaper executive and noted community leader with a strong interest in historic preservation. She and her late husband, Gene, formerly owned Bristol Newspapers, Inc.; Worrell Investment Company; and the Worrell Land and Cattle Company. The two also established the Genan Foundation in 1986, and Worrell served as its president. She was also the director of Thomas Jefferson's Poplar Forest Foundation and the honorary vice chairman of the Virginia Historical Society. The Center recognized Worrell's philanthropic commitment and dedication by naming the building's anteroom in her honor in 2009.