John Negroponte, whose career in diplomacy and national security spanned more than 40 years, has been appointed as the next James R. Schlesinger Distinguished Professor at the Miller Center for Public Affairs at the University of Virginia.

Negroponte, who commenced government service in 1960, was the first director of national intelligence under President George W. Bush and later served as deputy secretary of state, where he was the State Department’s chief operating officer. He has been ambassador to Honduras, Mexico, the Philippines, the United Nations, and Iraq. In Washington, he served twice on the National Security Council staff, first as director for Vietnam in the Nixon Administration and then as deputy national security advisor under President Ronald Reagan.

“It’s an honor for me to welcome this outstanding American diplomat to the Miller Center," said William Antholis, Director and CEO. “Ambassador Negroponte is widely respected in both parties. He is an exceptional intellectual, an experienced and distinguished practitioner, and a genuinely fine human being who enjoys engaging with students and faculty alike. Secretary Schlesinger would have been proud."

Negroponte is the vice chairman of McLarty Associates in Washington, DC. He serves as chairman emeritus of the Council of the Americas/Americas Society. He is co-chairman of the U.S.-Philippines Society and a past member of the secretary of state’s Foreign Affairs Policy Board. He has also served as chairman of the Intelligence and National Security Alliance. From 2009 to 2016, Negroponte taught international relations at Yale’s Jackson Institute and from 2016 to 2018 at The Elliott School for International Affairs at George Washington University.

While in the private sector from 1997 to 2001, Negroponte was executive vice president of the McGraw-Hill Companies, with responsibility for overseeing the firm’s international activities. During those years, he was also chairman of the French-American Foundation.

Negroponte has received numerous awards, including the State Department’s Distinguished Service Medal on two separate occasions, the highest award that can be conferred by the Secretary of State. In January 2009, President Bush awarded Negroponte the National Security Medal for his outstanding contributions to U.S. national security.

As the Schlesinger Professor over the 2018–2019 academic year, Negroponte will participate in Miller Center conferences and events; engage with faculty and students across the University of Virginia at the Batten School of Leadership and Public Policy, the Law School, and the History and Politics Departments; and contribute to the millercenter.org website and other Miller Center publications.

“As someone who knew and admired Jim Schlesinger all the way back to his days in the Nixon Administration, I am honored by this appointment,” Negroponte said. “I look forward to my involvement with the Miller Center, as well as the broader UVA community.”

The University of Virginia established the James R. Schlesinger Distinguished Professorship at the Miller Center in 2007 to bring public servants of great distinction to the University. Schlesinger served as secretary of defense and secretary of energy, in addition to holding leadership roles with the Central Intelligence Agency, Atomic Energy Agency, and numerous other government bodies during a distinguished career in public service.

Building on Schlesinger’s interest in strategic matters, the Schlesinger Professorship provides a unique opportunity for public servants who have experience with foreign policy and national security to participate as visiting faculty in programs at the Miller Center and engage with students at the University. 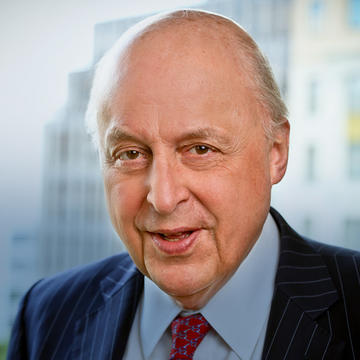 Negroponte was the first director of national intelligence under President George W. Bush and later served as deputy secretary of state, where he was the State Department’s chief operating officer.