An exploration of American citizenship during crisis

Since 2006, the National Conference on Citizenship (NCoC), Civic, and other partners have assembled top experts and institutions to release the Civic Health Index to better understand an array of civic health indicators that are measurable and movable.

Right now, the United States is facing some of the most significant challenges in its history.

NCoC defines “civic health” as the way that communities are organized to define and address public problems. Previous reports sought to identify challenges of citizenship and community, including civic deserts, and those working to address them, including “Netizens,” veterans, and millennials. Right now, the United States is facing some of the most significant challenges in its history. COVID-19 is reshaping institutions and civic life; the nation continues to reckon with its long history of systemic racism; and U.S. democracy is showing cracks.

The country’s ability to address these public problems is paramount. It requires an understanding of present trends in the United States’ civic health, which this report explores in detail.

Overall, most trends in civic health have been on the decline, including stagnating levels of civic education, dwindling community group membership, and worsening interpersonal and institutional trust. At the same time, there are signs of a vibrant civic nation with increased rates of volunteerism, political knowledge, and casting ballots, and millions of Americans joining together to protest police violence against Black Americans and other communities of color. These trends suggest a duality in the nation’s civic health.

The United States is at an inflection point. Crises have emerged that threaten the future of the nation.

Throughout, this report shares examples of individuals and institutions working in communities across the nation to expand civic life. In addition, strategies to increase civic engagement are featured, including

The United States is at an inflection point. Crises have emerged that threaten the future of the nation. To emerge stronger, it will require a renewed focus on increasing all aspects of civic health to address our shared problems.

This report was prepared by Civic, in partnership with the National Conference on Citizenship, the Miller Center, UVA's Democracy Initiative, and the Partnership for American Democracy. 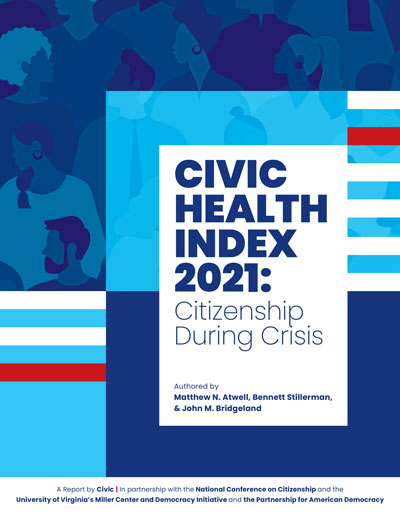