Eric Edelman, practitioner senior fellow, retired as a career minister from the U.S. Foreign Service in 2009, after having served in senior positions at the Departments of State and Defense as well as the White House. As the undersecretary of defense for policy (2005-2009), he oversaw strategy development as the Defense Department’s senior policy official with global responsibility for bilateral defense relations, war plans, special operations forces, homeland defense, missile defense, nuclear weapons and arms control policies, counter-proliferation, counter-narcotics, counter-terrorism, arms sales, and defense trade controls. Edelman served as U.S. ambassador to the Republics of Finland and Turkey in the Clinton and George W. Bush Administrations and was principal deputy assistant to Vice President Dick Cheney for national security affairs. Edelman has been awarded the Department of Defense Medal for Distinguished Public Service, the Presidential Distinguished Service Award, and several Department of State Superior Honor Awards. In January of 2011 he was awarded the Legion d’Honneur by the French government. In 2016, he served as the James R. Schlesinger Distinguished Professor at the Miller Center. 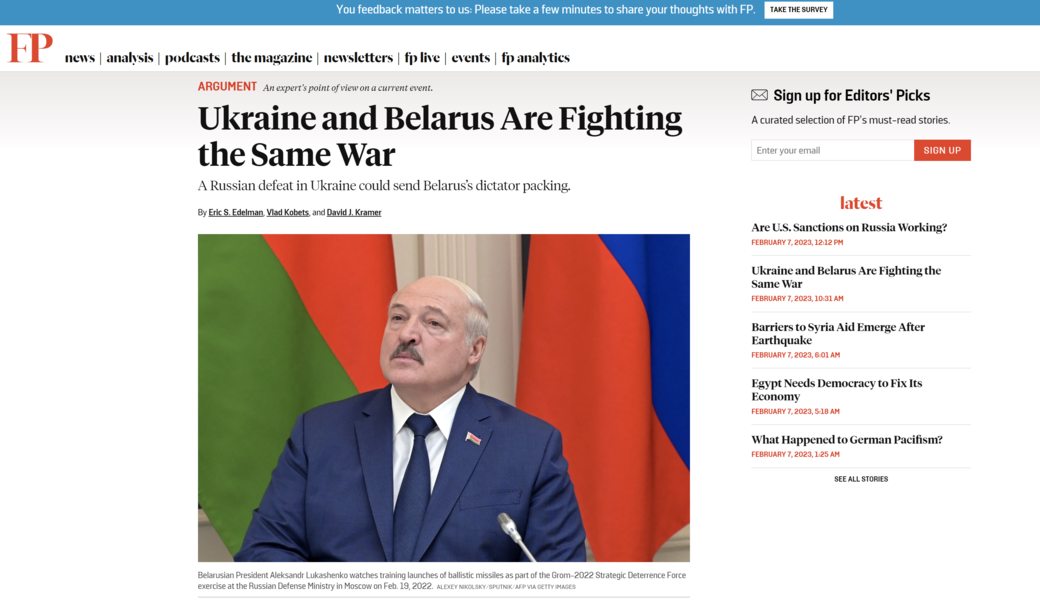 Ukraine and Belarus Are Fighting the Same War
The sooner the West helps Ukraine win, the sooner Ukrainians’ suffering will end and reconstruction of their country can begin. A Ukrainian victory would also benefit the people of Belarus, who have for 29 years lived under Aleksandr Lukashenko, often referred to as the “last dictator in Europe,” and whose political livelihood is dependent on Russian President Vladimir Putin. A Russian defeat in Ukraine would weaken Putin significantly enough that he can no longer bail out his fellow dictator—and could embolden Belarusians to try their hand at removing Lukashenko once more.
Eric Edelman Foreign Policy 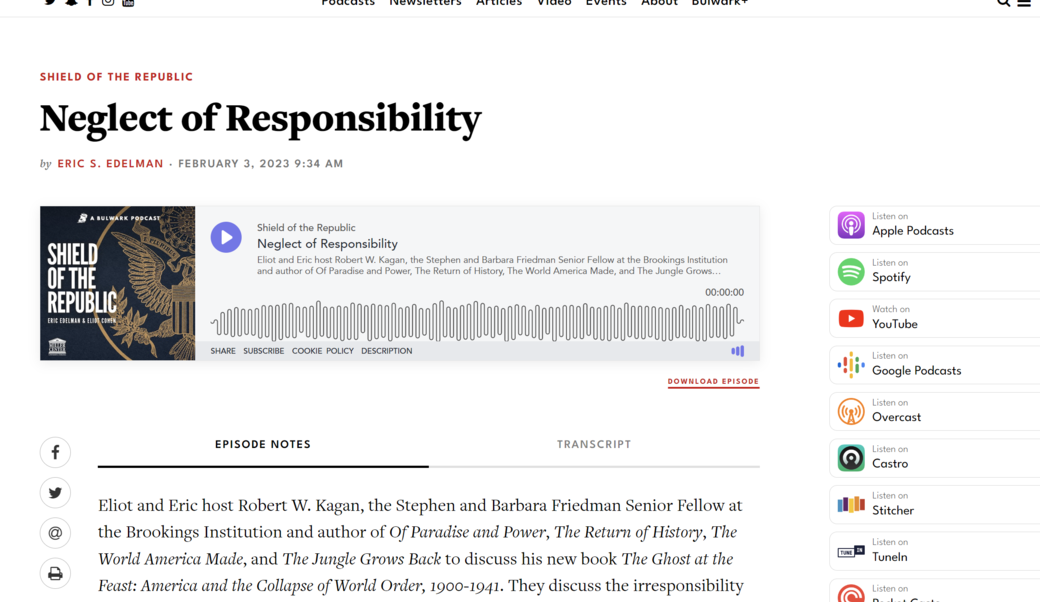 Neglect of Responsibility
Eliot and Eric host Robert W. Kagan, the Stephen and Barbara Friedman Senior Fellow at the Brookings Institution and author of Of Paradise and Power, The Return of History, The World America Made, and The Jungle Grows Back to discuss his new book The Ghost at the Feast: America and the Collapse of World Order, 1900-1941. They discuss the irresponsibility of American policy making after World War I, whether or not a more robust U.S. commitment to European security could have produced the kind of security order that the U.S. helped create after 1945, the ambivalence of American thinking about the necessity of global order and a reluctance to play a leading role in securing it, and the role of moral and ideological impulses in U.S. policy making. They also assess Woodrow Wilson and Franklin Roosevelt as statesmen and the state of the study of diplomatic history in the academy today.
Eric Edelman Shield of the Republic Podcast 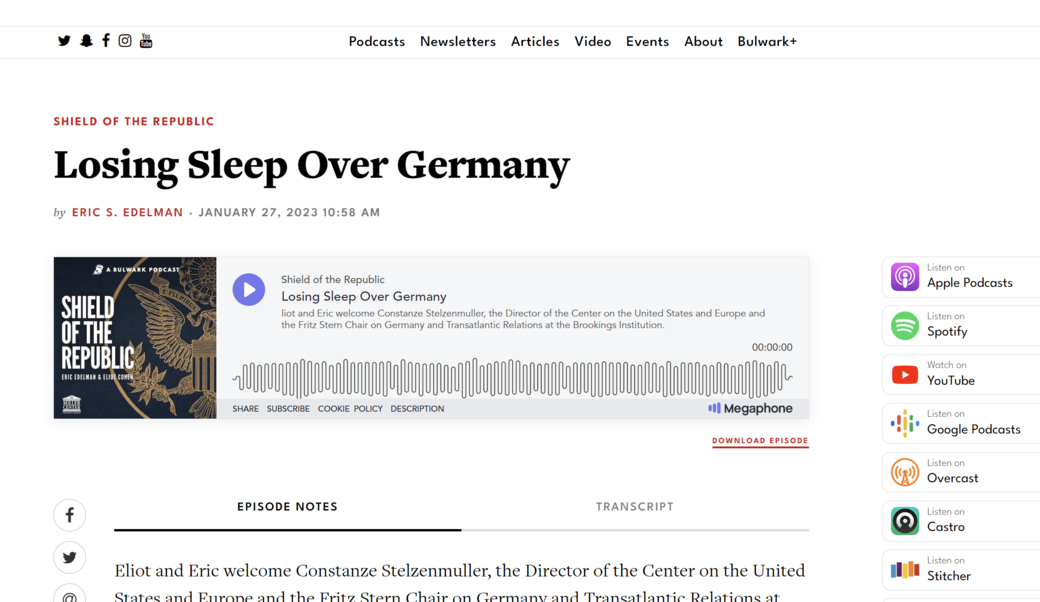 Losing Sleep Over Germany
Eliot and Eric welcome Constanze Stelzenmuller, the Director of the Center on the United States and Europe and the Fritz Stern Chair on Germany and Transatlantic Relations at the Brookings Institution. They discuss the current row over Germany providing Leopard Tanks to Ukraine, the political constraints on German Chancellor Olof Scholz, the role of Cold War ostpolitik on contemporary policy debates, the intellectual impact of Carl Schmitt and Victor Klemperer on elite German thinking, and the Hitler-Putin comparison. They end with a discussion on the late Judith Shklar as a political philosopher and teacher of political theory and her writings on power and cruelty.
Eric Edelman Shield of the Republic Podcast 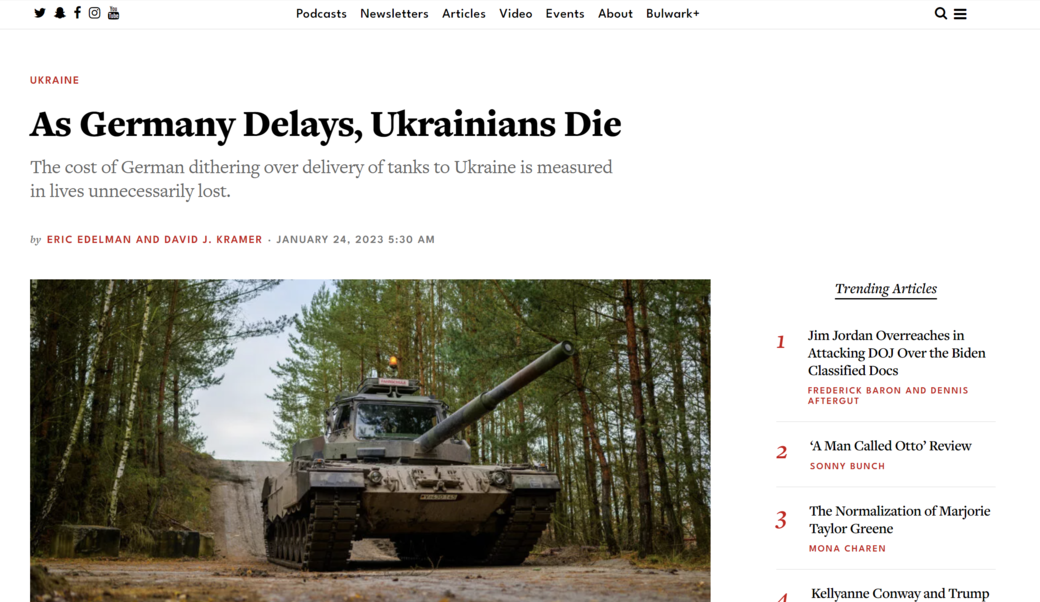 As Germany Delays, Ukrainians Die
Every day that Germany fails to approve or facilitate the transfer of its Leopard tanks to Ukraine is costing Ukrainian lives and risks emboldening the authoritarian Putin regime. Polish foreign minister Zbigniew Rau put it succinctly when he tweeted: “Arming Ukraine in order to repel the Russian aggression is not some kind of decision-making exercise. Ukrainian blood is shed for real. This is the price of hesitation over Leopard deliveries. We need action, now.”
Eric Edelman The Bulwark 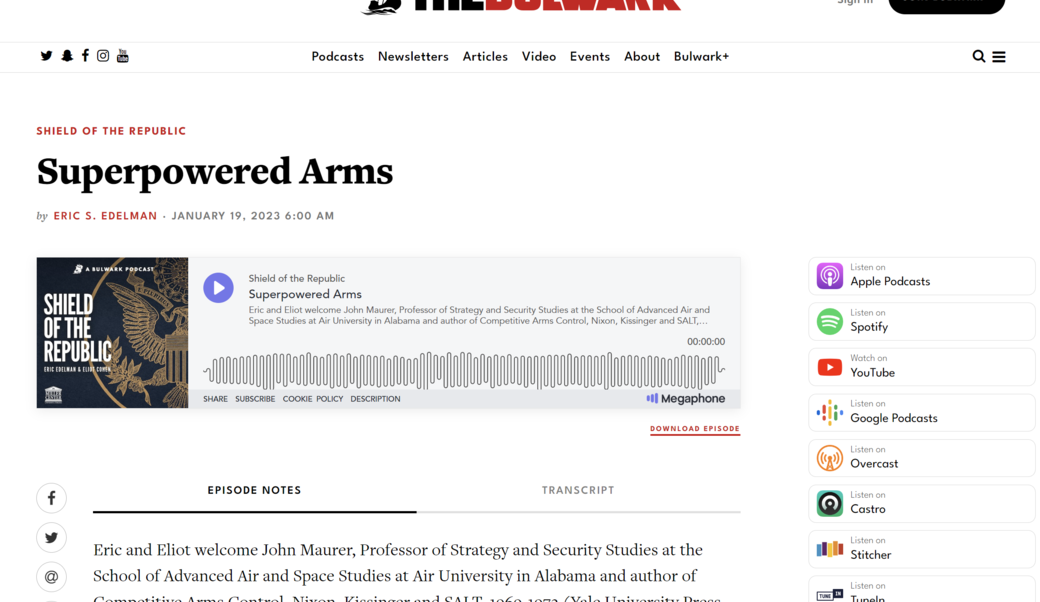 Superpowered Arms
Eric and Eliot welcome John Maurer, Professor of Strategy and Security Studies at the School of Advanced Air and Space Studies at Air University in Alabama and author of Competitive Arms Control, Nixon, Kissinger and SALT, 1969-1972 (Yale University Press, 2022). They discuss the competitive and cooperative approaches to arms control, interagency deliberations and conflicts in the Nixon Administration, the motivations and policies of Richard Nixon, Henry Kissinger, and especially Secretary of Defense Melvin Laird.
Eric Edelman Shield of the Republic Podcast 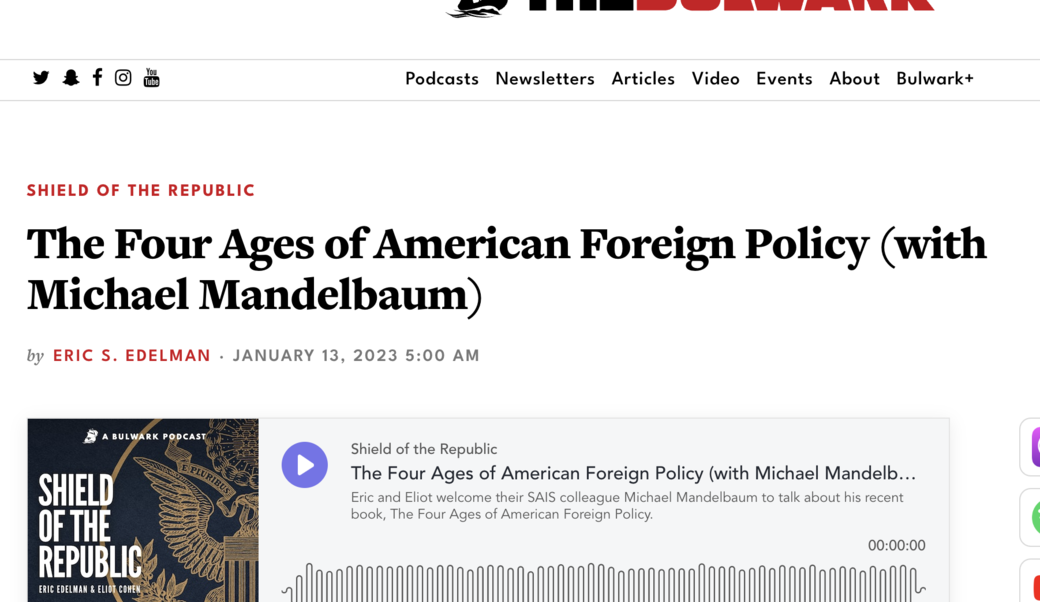