Guian McKee is an associate professor in presidential studies at the Miller Center. He earned a PhD in American history at the University of California, Berkeley in May 2002 and is the author of The Problem of Jobs: Liberalism, Race, and Deindustrialization in Philadelphia, published in November 2008 by the University of Chicago Press. At the Miller Center, McKee works extensively with the Presidential Recordings Program and co-directs the Health Care Policy Initiative.

McKee’s research focuses on how federal policy, especially in the executive branch, plays out at the local level in American communities. He has written extensively about urban policy, including a book (The Problem of Jobs) that explored the connections between local and federal economic, urban renewal, and antipoverty policies in Philadelphia between the 1950s and the 1980s. This project led to his work on the Lyndon Johnson White House recordings focused on the War on Poverty, as well as on the wider development of the Great Society.

His new book, Hospital City, Health Care Nation: Race, Capital, and the Costs of American Health Care, recasts the story of the U.S. health care system by emphasizing its economic, social, and medical importance in American communities. Focusing on urban hospitals and academic medical centers, the book argues that the country’s high level of health care spending has allowed such institutions to become vital, if often problematic, economic anchors for communities. Yet that spending has also constrained possibilities for comprehensive health care reform over many decades, even after the passage of the Affordable Care Act in 2010. At the same time, the role of hospitals in urban renewal, in community health provision, and as employers of low-wage workers has contributed directly to racial health disparities.

Hospital City, Health Care Nation will be published by the University of Pennsylvania Press in April 2023. It builds on McKee’s earlier work by connecting social, political, and economic developments in specific places (Baltimore provides a core case study for the book) with larger policy choices, especially those made by presidents (drawing on the Miller Center’s presidential oral histories). The book offers an alternative narrative of health care policy history – and of health care reform – by focusing on the consequences and importance of health care spending.

McKee has written about health care in a variety of venues, including a recent essay in the Washington Post on how the health care components of the 2022 Inflation Reduction Act follow a pattern of significant but incremental change that has been typical of health policy development throughout U.S. history. Earlier op-eds explored how the Affordable Care Act built on conservative reform proposals from previous decades, leaving the Republicans with limited policy choices when they sought to repeal the Act in 2017. McKee’s work on health care also led to an essay on Lyndon Johnson and the passage of Medicare and Medicaid for the Miller Center’s First Year Project, for which he served as a co-editor of Volume 3 on Fiscal Policy and Volume 6 on Opportunity and Mobility.

As part of the Miller Center’s Presidential Recordings Program, McKee edited Volumes 6 and 7 of The Presidential Recordings of Lyndon B. Johnson. These volumes cover the period from mid-April to mid-June 1964, during which the Johnson administration lobbied for passage of the Civil Rights and Economic Opportunity Acts and struggled with increasing difficulties in Southeast Asia. He is also the editor of two thematic volumes that include all of Johnson’s recorded conversations about the War on Poverty, and co-editor of a two-volume series covering the election of 1964. These projects are published digitally by the University of Virginia Press through its Rotunda electronic imprint.

McKee has published articles in the Journal of Urban History, Journal of Policy History, Journal of Planning History, the Federal Reserve Bank of San Francisco’s Community Development Investment Center, the Washington Post, The Hill, the Boston Globe, USA Today, and U.S. News and World Report. In 2007, he delivered the keynote address at the conference "In the Shadow of the Great Society: American Politics, Culture and Society Since 1964," hosted by the Rothermere American Institute and the American History Research Seminar, University of Oxford, UK. 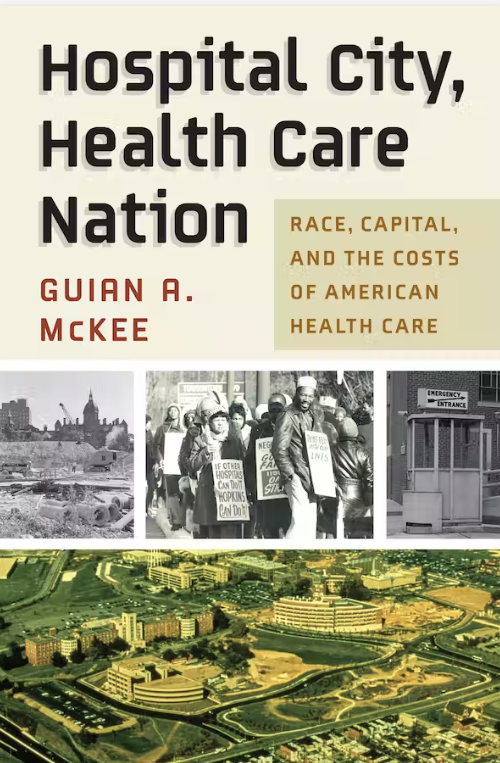 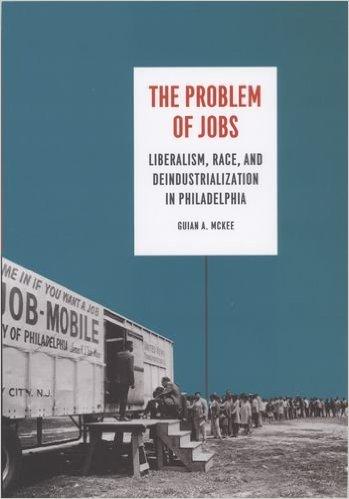 The Problem of Jobs: Liberalism, Race, and Deindustrialization in Philadelphia 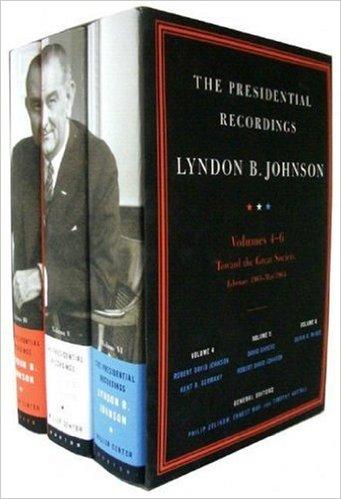 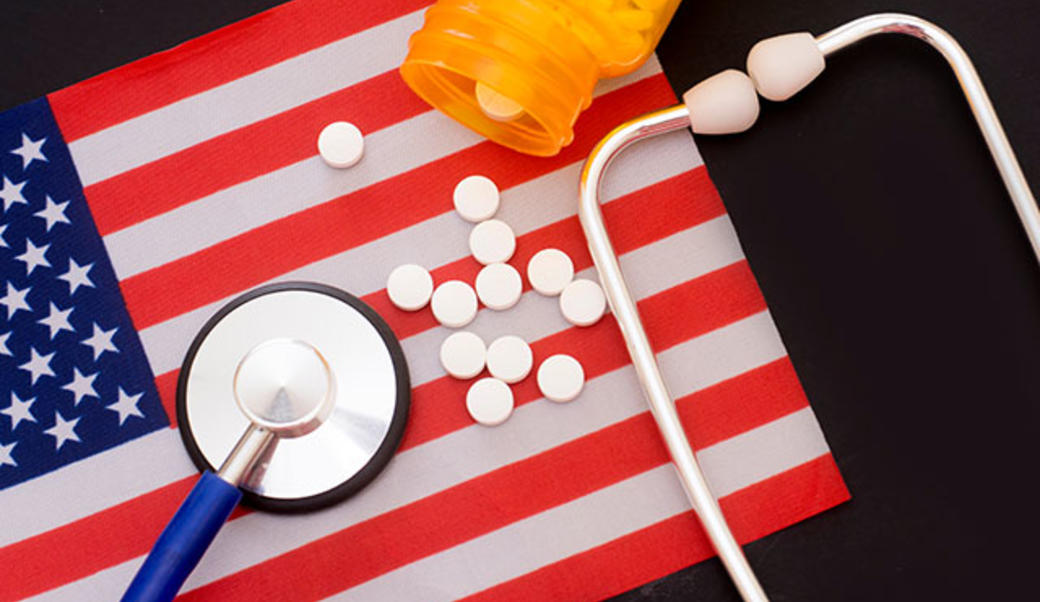 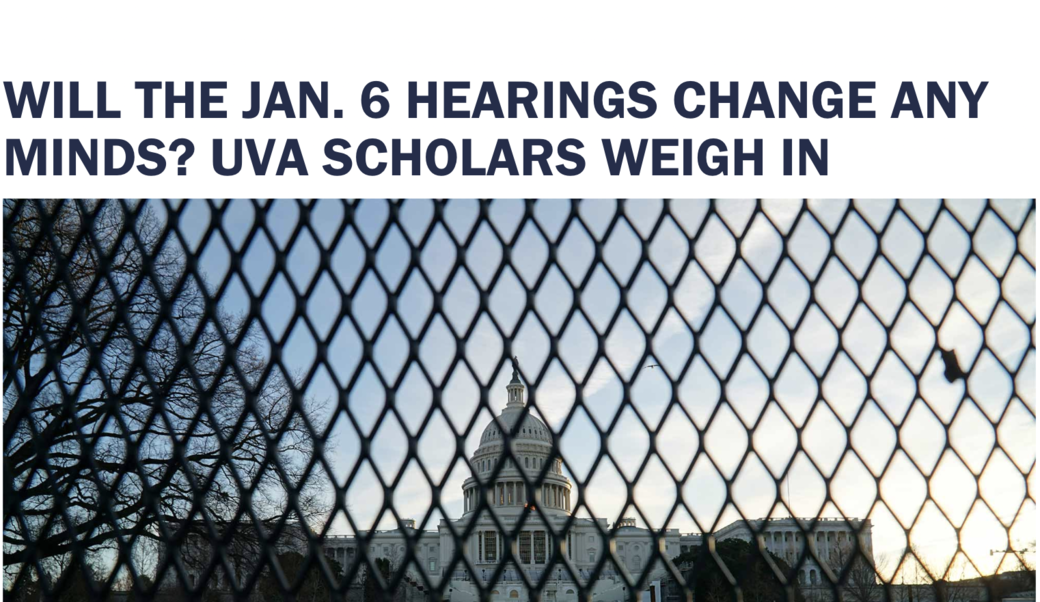 Will the Jan. 6 hearings change any minds? UVA scholars weigh in
"The hearings were carefully designed to deliver a series of key moments that can circulate in both traditional and social media," says Guian McKee, an associate professor in presidential studies at UVA's Miller Center. "Some of those may break through partisan bubbles, or simple apathy, to create at least a limited shift in public opinion—a shift to the realization that the insurrection was an assault on the Constitution, and that its apologists are staging a slow-moving assault on democracy. Ultimately, there is a question about whether there is still any capacity for shame in American public life. I hope that there is."
Guian McKee UVA Today 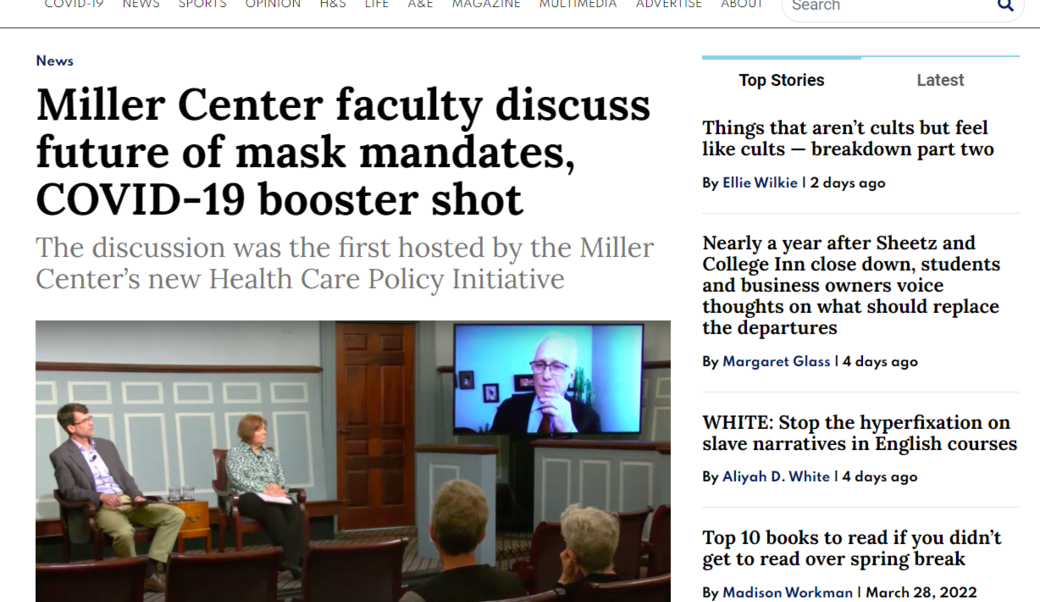 Miller Center faculty discuss future of mask mandates, COVID-19 booster shot
A panel of professors and researchers discussed the pandemic’s impact on public health policy Wednesday, the first undertaking of the Miller Center’s Health Care Policy Initiative. The event included discussion about the legacy of COVID-19 in the U.S., how the Biden administration is dealing with the ongoing pandemic, the relationship between pandemics and foreign policy and how individuals can deal with uncertain public health measures as mask mandates are lifted around the country.
Guian McKee The Cavalier Daily 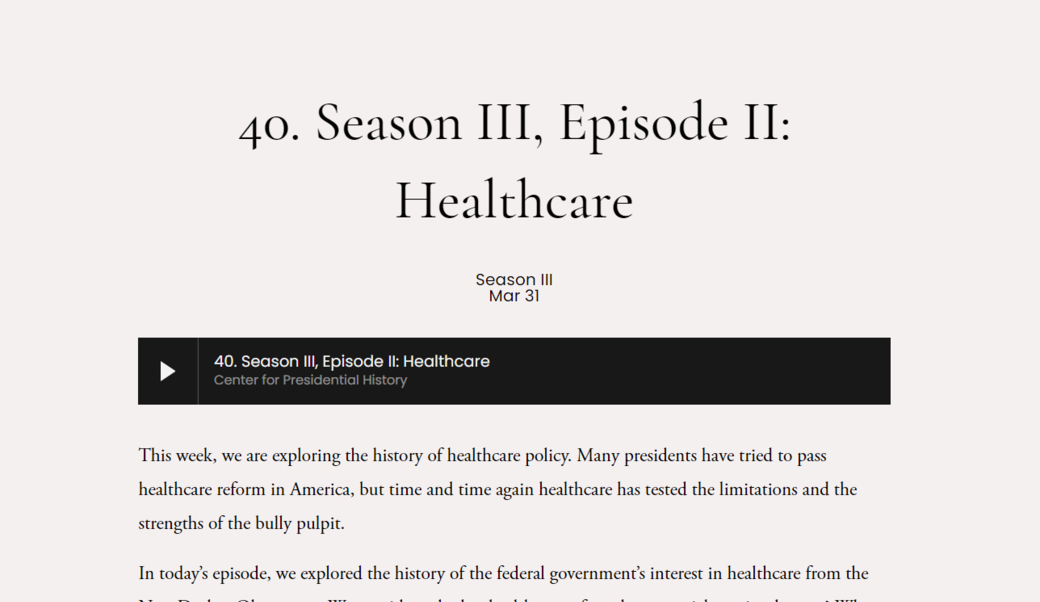 Season III, Episode II: Healthcare
This week, we are exploring the history of healthcare policy. Many presidents have tried to pass healthcare reform in America, but time and time again healthcare has tested the limitations and the strengths of the bully pulpit. In today’s episode, we explored the history of the federal government’s interest in healthcare from the New Deal to Obamacare. We consider, why has healthcare reform been so tricky to implement? What role does the president play in passing healthcare reform? And, how has the pandemic shaped our ideas about healthcare, public health, and the presidency? We spoke with two special guests. Professor Merlin Chowkwanyun is an assistant professor at the Columbia University School of Public Health. His new book, All Health Politics is Local: Battles for Community Health in the Mid-Century United States is available for preorder from UNC Press. Dr. Guian McKee is an Associate Professor in Presidential Studies at the Miller Center, where he works on the Presidential Recordings Project. He is also currently working on a book project that examines the rise of the health care economy in American cities after World War II.
Guian McKee Bully Pulpit Podcast 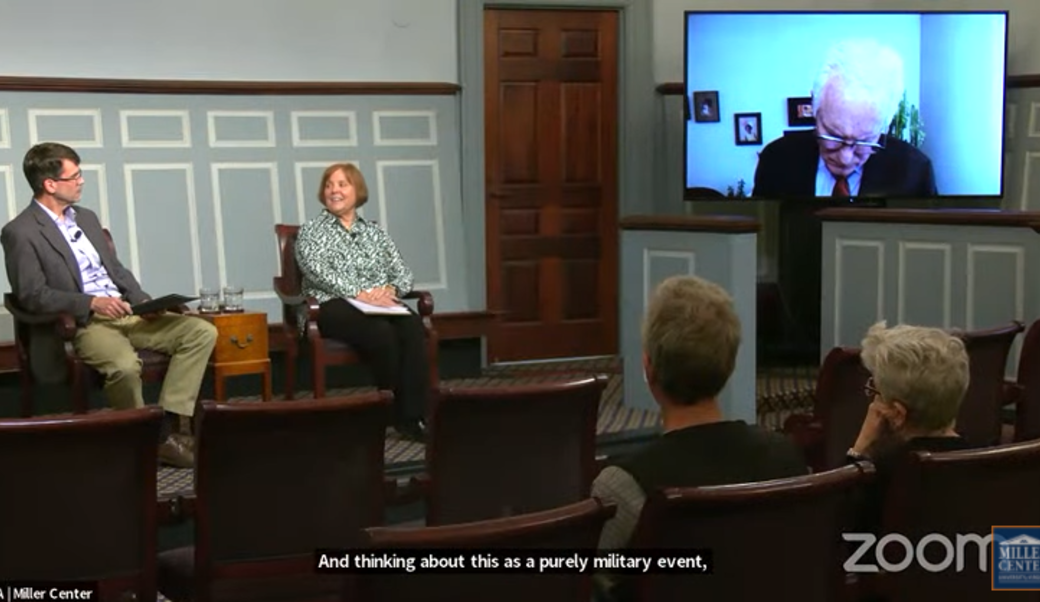 The fight against COVID: Has the U.S. entered a new normal?
In early March, the White House unveiled its new coronavirus response strategy aimed at creating what some are calling the beginning of a “new normal” in the nation’s fight against COVID-19. As the Omicron wave continues its decline and several states loosen pandemic-related restrictions, our experts are having a “state of the pandemic” discussion that will assess the rapidly shifting public health approach, what the U.S. role will be in the global efforts to deal with COVID, and what we might expect in the months ahead.
Guian McKee Miller Center Presents 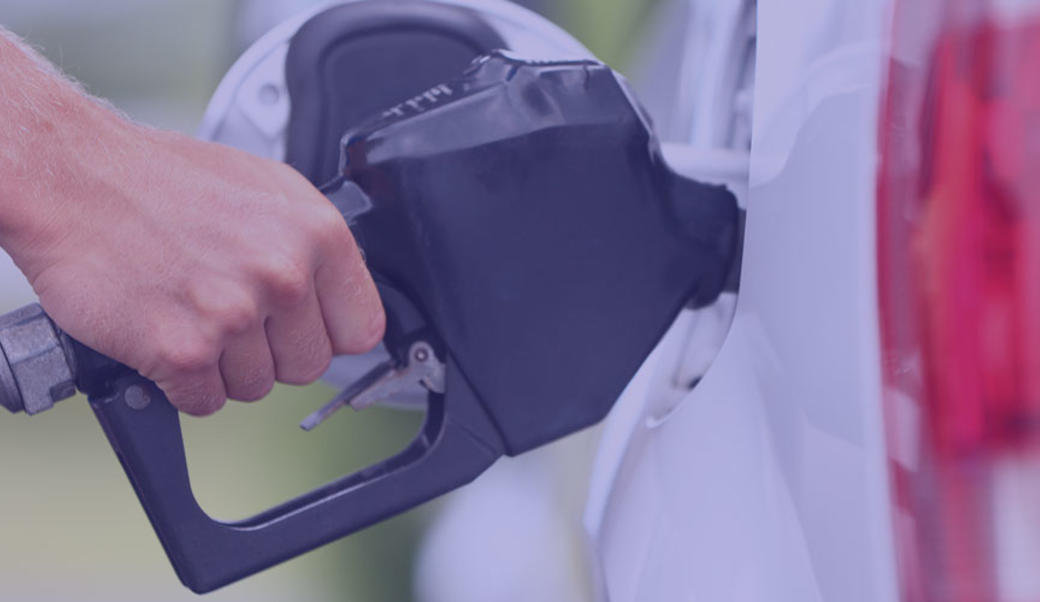 Could price controls be Biden's answer to inflation?
Most mainstream economists today oppose price controls, although in recent months a sometimes-intense debate has emerged over the issue.
The Hill