Paul B. Stephan, John C. Jeffries, Jr., Distinguished Professor of Law and David H. Ibbeken ’71 Research Professor of Law at the University of Virginia Law School, is an expert on foreign relations law, international law, comparative law, international business, international civil litigation, and international dispute resolution, with an emphasis Russian, Soviet, and post-Soviet legal systems. He joined the University of Virginia faculty in 1979. During 2006-07, he served as counselor on international law in the U.S. Department of State, and in 2020-21 as special counsel to the general counsel in the U.S. Department of Defense. He also worked with the U.S. Department of Treasury, the IMF, the World Bank, and the OECD on issues of global tax reform from 1993 to 1998. He was coordinating reporter for the American Law Institute’s Restatement (Fourth) of the Foreign Relations Law of the United States (2018). His book, The World Crisis and International Law – The Knowledge Economy and the Battle for the Future, will be published by Cambridge University Press in early 2023.

Stephan earned his BA and MA from Yale University in 1973 and 1974 and his JD from the University of Virginia in 1977. Before returning to Virginia, he clerked for Judge Levin Campbell of the U.S. Court of Appeals for the First Circuit and for U.S. Supreme Court Justice Lewis F. Powell Jr. He has taught as a visiting professor at the Moscow State Institute for International Relations, the University of Vienna, Münster University, Lausanne University, Melbourne University, University of Pantheon-Assas (Paris II), Sciences Po, Paris I, the Interdisciplinary Centre Herzliya, Sydney University, the Peking University School of Transnational Law in Shenzhen, China, and the University of Tartu’s Pärna College. He also has visited at Columbia Law School and Duke Law School and served as a scholar in residence in the London office of the international law firm Wilmer Hale. He has served as an expert witness on matters of international and foreign law in many judicial and arbitral proceedings. In particular he has assisted Ukraine’s national oil and gas company in its international claims against Russia for property seized in Crimea. Both houses of Congress have invited him to testify on foreign relations issues on several occasions, most recently on the use of sanctions against Russia and its supporters in response to the invasion of Ukraine.

Stephan has written many books and published more than 100 articles. He is the co-author, with Robert Scott, of The Limits of Leviathan: Contract Theory and the Enforcement of International Law (Cambridge University Press, 2006), as well as many textbooks concerning the world economy. In summer 2023 he will lead a course at the Hague Academy of International Law on the relationship between international law and domestic law. The Academy will publish these lectures as part of its Recueil des Courses book series. 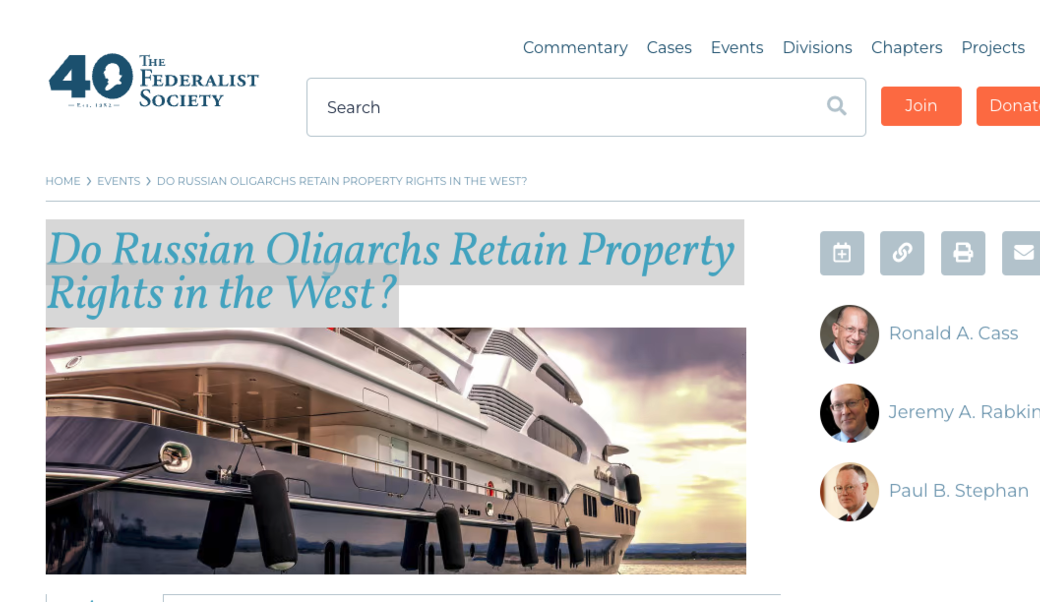 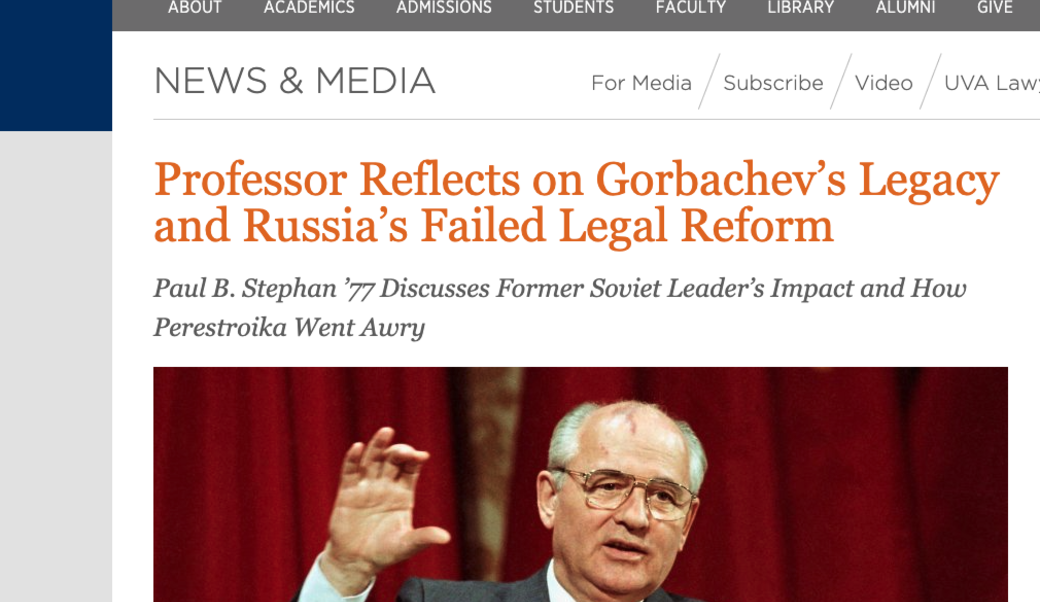 Professor reflects on Gorbachev’s legacy and Russia’s failed legal reform
The University of Virginia's Miller Faculty Senior Fellow Paul B. Stephan reflected on Gorbachev’s impact on ending the Cold War and why he couldn’t hold on to power—or retain the esteem of his fellow Russians.
Paul B. Stephan UVA School of Law 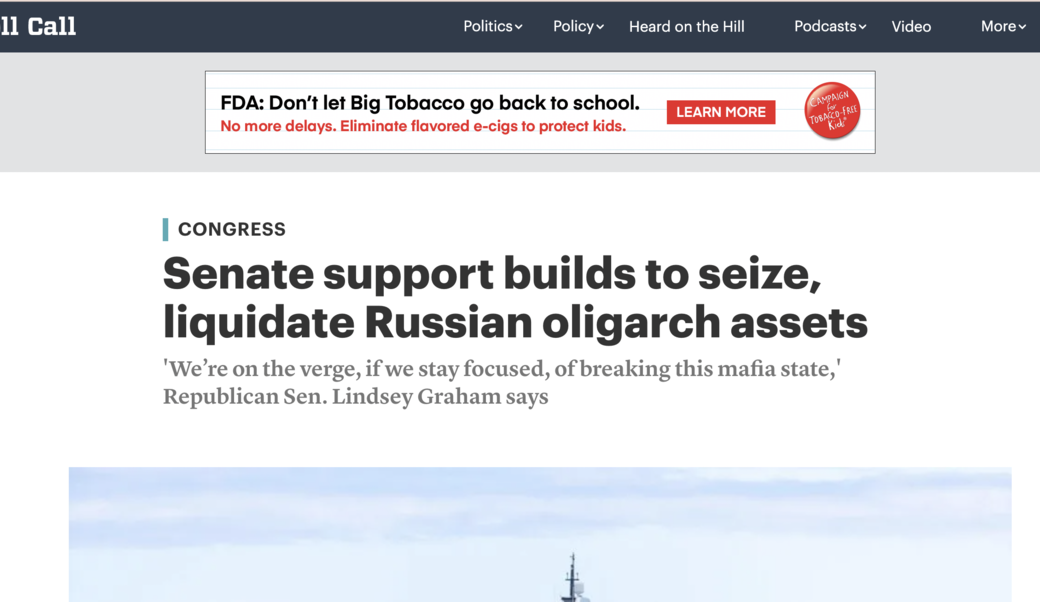 Senate support builds to seize, liquidate Russian oligarch assets
Congress and the Biden administration may be on shaky constitutional ground if they proceed with a plan to include in the legislation the “retroactive application of civil forfeiture of property brought into this country legally,” said Paul Stephan, a University of Virginia law school professor and faculty senior fellow at UVA's Miller Center, who formerly held positions with the State and Defense departments.
Paul B. Stephan Rollcall 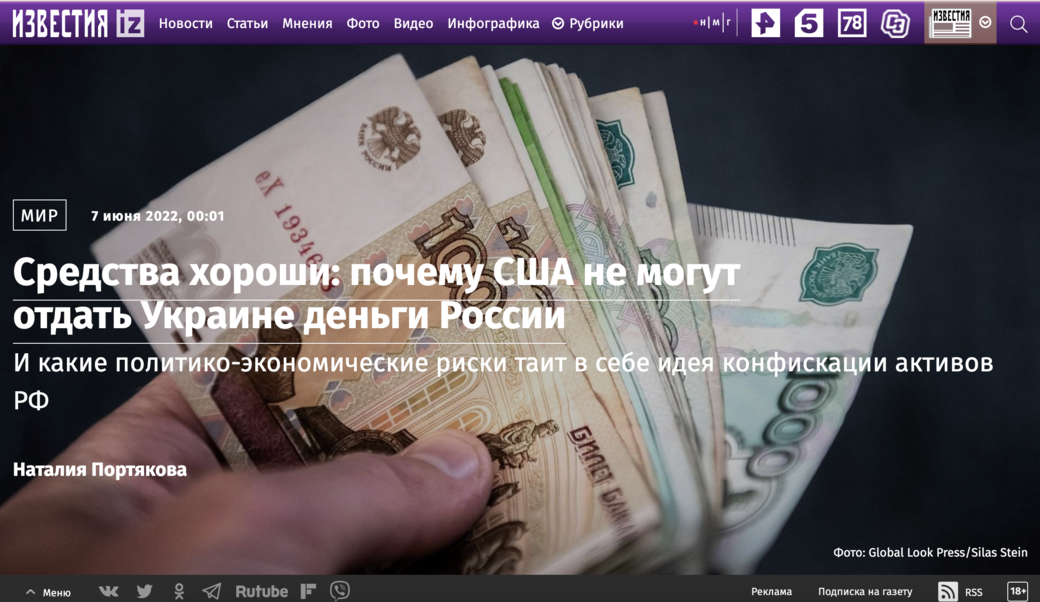 The Russian gold reserves—why the USA cannot transfer them to Ukraine
"The current legislation does not allow the US executive branch to dispose of Russian state assets before concluding an agreement with this state,” Paul Stephan, professor of law at the University of Virginia and faculty senior fellow at the University of Virginia's Miller Center, explained to Izvestia.
Paul B. Stephan Izvestiya (Russia) 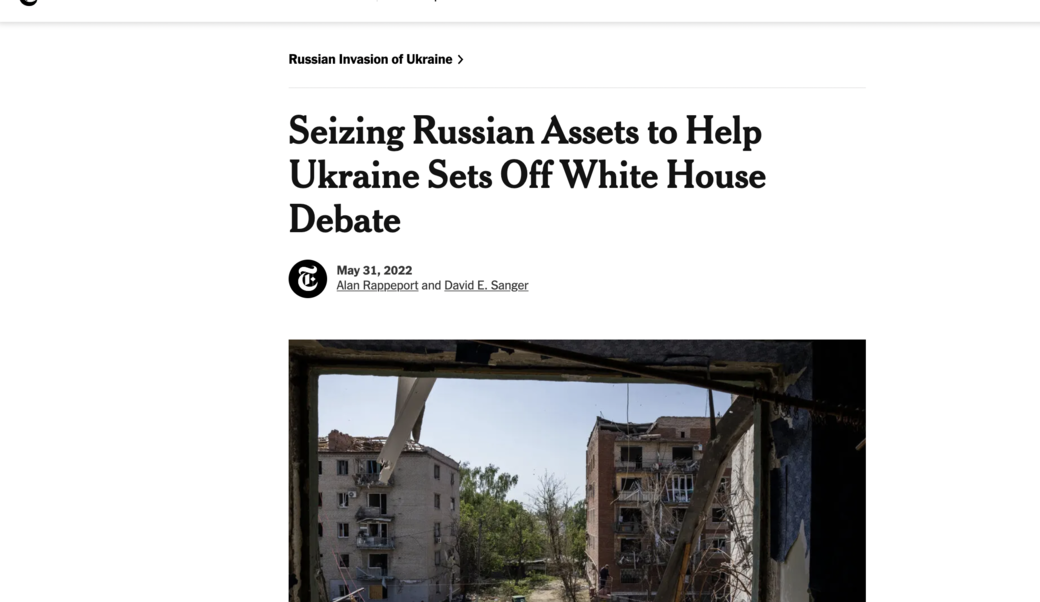 Seizing Russian assets to help Ukraine sets off White House debate
According to Paul B. Stephan, a law professor at the University of Virginia and faculty senior fellow at UVA's Miller Center, the examples of Afghanistan and Venezuela are not comparable because the United States did not recognize those governments as legitimate.
Paul B. Stephan New York times