How disagreement makes our scholarship stronger

How disagreement makes our scholarship stronger

The Miller Center's decision to appoint Marc Short, President Trump's former director of legislative affairs, to a one-year senior fellowship has triggered controversy inside the Miller Center, within the University of Virginia, and beyond. Some believe Short can provide insights about the Trump presidency that would otherwise be unavailable. Others argue that this administration is not just disruptive but is, in fact, dangerous—and appointing Short as a senior fellow sends the wrong message.

Internally, the appointment sparked a robust debate and the resignations of two University of Virginia history professors, who ended their affiliations with the Miller Center to return to their full-time positions in the UVA history department.

The ongoing internal debate and discussion is helping us hone our approach to our own scholarship. It's an opportunity for a broader conversation about big-picture questions: What does it really mean to be nonpartisan? What will it look like to study the Trump presidency, as unprecedented and divisive as it is? How can we learn from this controversy and use it to foster and enrich the type of civil discourse that is the cornerstone of our mission?

As an organization committed to the clear-eyed, nonpartisan study of the U.S. presidency, the Miller Center believes that this same objectivity should be applied to the controversy itself. We believe that rigorous yet respectful discussion—no matter how controversial or laden with emotion—is crucial for a healthy democracy.

In that spirit, here is a collection of op-eds and news stories examining the Short appointment from a variety of perspectives.

Rationale for the appointment

Miller Center Director and CEO William Antholis announced the Short appointment in a news release on July 12. He then elaborated on his reasoning in an open letter issued on July 27 that was republished in the Washington Post. "This appointment is squarely in our core work of studying the presidency," Antholis wrote. "Marc’s experience and expertise only strengthen our ability to understand and explain this administration, including in its most difficult and divisive moments."

The University of Virginia hired a Trump staffer days before the Charlottesville anniversary and, as an alum, I'm okay with that, The Root, July 20

Two Historians Resigned Over the Appointment of a Trump Flunky at UVA. They Were Right to Do So., Slate, July 30

We quit our UVA history center because it hired an enabler of Trump's anti-truth, The Washington Post, William Hitchcock and Melvyn Leffler, July 31

It's true: Trump is lying more, and he's doing it on purpose, The New Yorker, August 3

It's Got Nothing to Do with Free Speech: Universities Should Not Hire Members of the Trump Administration, Paste, August 9

How should universities handle the Trump administration?, The Boston Globe, August 13

Just say no to hard and fast rules about Trump appointees being at universities, The Washington Post, August 15

From Trumptown to UVA, Inside Higher Ed, July 20

About the Miller Center

The Miller Center is a nonpartisan affiliate of the University of Virginia that specializes in presidential scholarship, public policy, and political history and strives to apply the lessons of history and civil discourse to the nation's most pressing contemporary governance challenges. 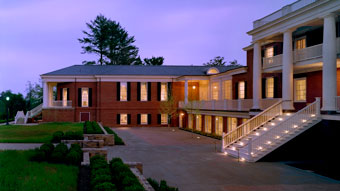