How America goes to war

How America goes to war

Congress last declared war on June 4, 1942, when it recognized Hungary, Romania, and Bulgaria—Axis powers under the control of Nazi Germany—as enemies in World War II.

United States involvement in the Korean War began with a United Nations Security Council resolution on June 27, 1950. More than 54,000 Americans died in Korea; another 58,000 perished in Vietnam over the course of more than two decades. U.S. involvement in Southeast Asia covered the Eisenhower, Kennedy, Johnson, Nixon, and Ford presidencies—all without a formal declaration of war from Congress. Other military actions since the Second World War include the Bay of Pigs invasion, the invasion of Grenada, the invasion of Panama, the Gulf War, actions in Somalia, Bosnia-Hertzegovina, Kosovo, and wars in Iraq and Afghanistan. 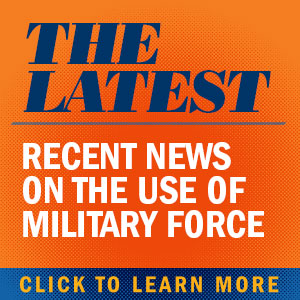 By 1973, Congress responded to the Vietnam War with the War Powers Resolution in order to "to fulfill the intent of the framers of the Constitution of the United States and insure that the collective judgment of both the Congress and the President will apply to the introduction of United States Armed Forces into hostilities . . ."

The result, however, was more confusion, and the sense that Congress merely issues the president a blank check to use military force when, where, and for however long he chooses.

The relevant law now on the books — the War Powers Resolution of 1973 — tends to be honored in the breach rather than by observance.

In response, former Secretaries of State James A. Baker III and Warren Christopher agreed to co-chair the Miller Center’s bipartisan National War Powers Commission, beginning work in 2007. Over 14 months, the commission met seven times, interviewing more than 40 witnesses. The commission then issued its unanimous report to the President and Congress, calling for the repeal and replacement of the War Powers Resolution of 1973 with the proposed War Powers Consultation Act. In the following months, Secretaries Baker and Christopher briefed President Obama and testified before the House Foreign Affairs Committee and the Senate Foreign Relations Committee about the proposed legislation.

As the world becomes more dangerous and complex, and demands continue to increase for American leadership, we need to establish a better system of communication between the president, Congress and the American people, especially on decisions of war and peace.

Senators John McCain [R-AZ] and Tim Kaine [D-VA] took up the cause and introduced the War Powers Consultation Act of 2014, based on the work of the Miller Center's commission. So far, the bill has failed to secure passage, but Senator Kaine continues to work across the aisle to deliver this much-needed legislation.

John C. Jeffries, Jr., the Emerson Spies and Arnold H. Leon Professor of Law of the University of Virginia School of Law, and W. Taylor Reveley, III, President and John Stewart Bryan Professor of Jurisprudence at the College of William & Mary, served as Co-Directors of the Commission. The War Powers Consultation Act:

“This statute does not attempt to resolve the constitutional questions that have dominated the debate over the war powers, and does not prejudice the president or Congress their right or ability to assert their respective constitutional war powers,” said Secretary Baker when the report was released. “What we aim to do with this statute is to create a process that will encourage the two branches to cooperate and consult in a way that is both practical and true to the spirit of the Constitution.”

“We have tried to be as specific as possible in this report and in this legislation,” said Secretary Christopher. “We have defined the kinds of armed conflict that would be covered by the statute, and have laid out a clear course of action for both the president and Congress that is practical, constructive and deliberative.”

On April 20, 2018, the Miller Center invited Senator Tim Kaine (D-VA) and UVA Law's John Jeffries to discuss the issue of war powers and the work of the Center's National War Powers Commission. The event took place in the historic Rotunda on Central Grounds.

From the Miller Center to the Senate floor

The Constitution on war powers

The Congress shall have Power . . . To declare War, grant Letters of Marque and Reprisal, and make Rules concerning Captures on Land and Water;
U.S. Constitution, Article I, Section 8

Federal courts and the war powers

Text of the War Powers Resolution of 1973

Text of the War Powers Consultation Act of 2009