By the Book: Chester Arthur

By the Book: Chester Arthur 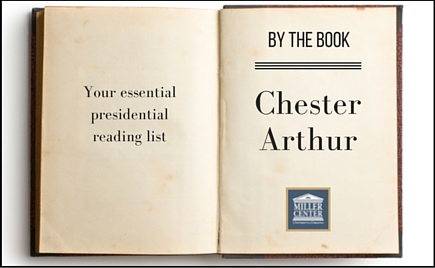 Chester A. Arthur came into office after the tragedy of James Garfield’s assassination. In his first year, Arthur faced issues like immigration and civil service reform, postal route scandals, an internal improvement bill, and had to face the fact that the Republicans would lose control of the House in the mid-term elections.

President Arthur certainly is lumped into the “dead white guy” presidents. However, his story is an interesting one and certainly deserves a read. One interesting topic is that, as a young lawyer, Arthur tried the Jennings v. Third Ave Railroad case (1855) that desegregated New York City transit.

Few people know that the future president had abolitionist sentiments. On July 16, 1854, an African-American woman, Elizabeth Jennings, was thrown off the Third Avenue horse-drawn trolley car. The word spread and the next day, a meeting was held at Jennings’ church, and the pastor consulted the firm of Culver, Parker, and Arthur. Erastus Culver was widely known for being an abolitionist. Arthur, who was 24 at the time and just passed the bar, was assigned the case. He argued that the revised statutes stated that companies were liable for their agents’ actions. Jennings did nothing wrong and that blacks could not be arbitrarily expelled from a trolley car. There was no law that segregated trolley cars. Jennings won the case and it led to more desegregation.

The most comprehensive biography is Thomas C. Reeves’ Gentleman Boss: The Life of Chester Alan Arthur, although he only mentions the Jennings case in one page. One possible reason is that this book was written in 1975, but the author had the privilege of talking to the president’s grandson, Chester Arthur III. Chester Alan Arthur by Zachary Karabell is a fair treatment but does not mention this case at all.

One of Arthur’s most famous legacies was civil service reform. For the best book on this topic, Ari Hoogenboom wrote Outlawing the Spoils: A History of the Civil Service Reform Movement, 1865-1883.

In 2017, we look forward to Scott Greenberger of Pew Charitable Trusts publishing a book on Arthur from Da Capo Press, so stay tuned.