By the Book: Gerald Ford

By the Book: Gerald Ford 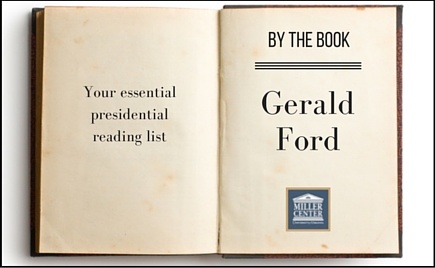 He was often called “the accidental president.” And if the sparse number of Gerald Ford biographies is any indication, historians consider Ford an incidental president as well. In an era of towering personalities and epic presidencies, the Ford administration nestles like a comma, a chance for the nation to catch its breath before hurtling headlong into the Carter-Reagan years.

Ford was a man out of place – or rather, out of time. In an age marked by popular democracy and populist discontent, he served as both vice president and president without ever being elected to either office. He rose to what was arguably the most powerful position in the world at a time when Americans had grown wary of power.

The best way to understand Gerald Ford, then, is to embrace the contradiction. Douglas Brinkley moves Ford to the center of the story in his biography for Arthur Schlesinger’s American Presidents series. Told in a quick two hundred pages, the book is not exhaustive, but it rediscovers Ford’s political talents, honed over nearly a decade as the House Minority Leader. As David Broder pointed out in his review of the book, if it has a flaw, it’s that it makes Ford a little too central, crediting him with political victories that others scored.

Which is why it’s best to pair Brinkley’s book with The Seventies by Bruce Schulman. Schulman captures all the tumult and tension of the decade. Ford appears in the middle of this chaos like a swimmer caught in a riptide, his substantial skill and strength overcome by much larger forces. History has conspired to make Ford the most forgettable of postwar presidents; historians will hopefully do more to recover his legacy.