By the Book: Herbert Hoover

By the Book: Herbert Hoover 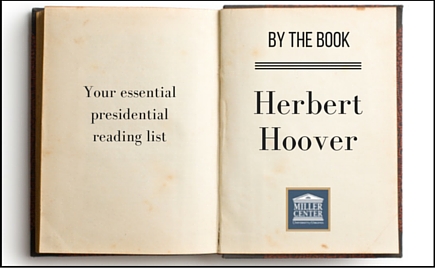 Herbert Hoover has taken his lumps by scholars as much as the general public. His handling of the Great Depression ruined his reputation, and historians William E. Leuchtenburg and Arthur M. Schlesinger, Jr. put more nails in the president’s coffin.

However, Hoover is a subject of revisionism as time passes from the 1930s. Hoover’s pre-presidency is important part that gets overshadowed because of his years in the White House. For the most comprehensive look, readers should turn to George H. Nash’s The Life of Herbert Hoover: The Engineer, The Humanitarian, and Master of Emergencies. Readers wanting a one-volume treatment, Kendrick A. Clements’ book, The Life of Herbert Hoover: Imperfect Visionary, 1918-1928, is well-balanced, especially for the time Hoover was secretary of commerce under Coolidge.

So, what about Hoover’s presidency? Scholars are moving away from the idea that Hoover was this old Republican Standpatter. He did believe in some government intervention and cooperation during the Great Depression. The Life of Herbert Hoover: Fighting Quaker by Glen Jeansonne is a good example of this. His cradle to grave biography, Herbert Hoover: A Life, will be coming out later this year. Charles Rappleye also gives us a more balanced look at Hoover with his recent monograph Herbert Hoover in the White House. He has a fresh approach by looking at the president's leadership skills or the lack of them as he faced one of the nation’s gravest crises.

Hoover’s post-presidency should not be forgotten either. Two well-written books cover this period: George H. Nash’s Freedom Betrayed: Herbert Hoover’s Secret History of the Second World War and Its Aftermath and the more comprehensive The Life of Herbert Hoover: Keeper of the Torch, 1933-1964 by Gary Best.