By the Book: Warren G. Harding

By the Book: Warren G. Harding 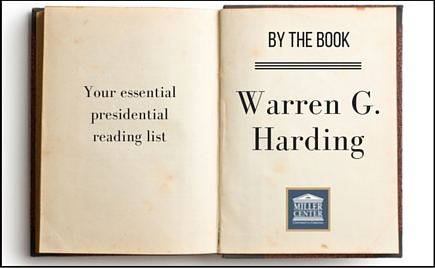 President Harding is a victim of scholar neglect. The result is that he is near the bottom of scholar polls, and the general public gives him only 29% favorability. Yet, Harding presided over an important time period and he one of only four presidents to get over 60% of the vote. (Nixon, FDR, and LBJ were the others). Yes, Warren Harding presided over scandals and affairs, but so did other presidents. Why is he made to suffer?

Most readers will reach for Francis Russell’s The Shadow of Blooming Grove. Russell’s book has serious defects, but this book is also a victim of legacy issues: family control of the image. The Harding family sued the author over the use of family documents, and because of that, the author was barred from paraphrasing and including any correspondence.

The best book on President Harding’s pre-presidency is Randolph C. Downes’ The Rise of Warren Gamaliel Harding: 1865-1920, and the most balanced treatment still remains The Harding Era by Robert K. Murray.  The strength of Murray’s book is that he puts Harding into the context of his times.  However, these books are over 40 years old. A more recent account is John W. Dean’s Warren G. Harding. Dean, of Nixon White House fame, grew up in the same town Harding lived in, and the author does defend Harding’s reputation, probably too far in the revisionist pendulum.