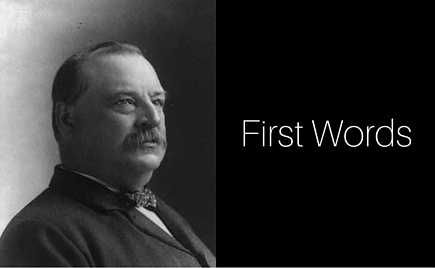 In this ongoing series, the Miller Center’s First Year Project looks at key phrases from past inaugural addresses—the first words spoken by our new presidents. Today we look at Grover Cleveland.

Personal and governmental integrity lay at the heart of the campaign of 1884, which pitted Democrat Grover Cleveland against Republican James G. Blaine. While Cleveland preached honesty and efficiency in government, Blaine promoted tariff protection as the centerpiece of his campaign. Democrats portrayed Blaine as a tool of moneyed interests, willing to use political influence to obtain personal favors. Republicans circulated rumors that Cleveland had fathered an illegitimate child—which Cleveland immediately admitted might be true, telling his supporters to “Tell the Truth.”

Cleveland ended up carrying the critical state of New York by fewer than 1,500 votes out of more than one million cast, becoming the first Democratic president since the Civil War, and in his first words to the nation, he emphasized healing partisan divisions and a citizen’s duty to scrutinize the government.

In the presence of this vast assemblage of my countrymen I am about to supplement and seal by the oath which I shall take the manifestation of the will of a great and free people. In the exercise of their power and right of self-government they have committed to one of their fellow-citizens a supreme and sacred trust, and he here consecrates himself to their service.

To-day the executive branch of the Government is transferred to new keeping. But this is still the Government of all the people, and it should be none the less an object of their affectionate solicitude. At this hour the animosities of political strife, the bitterness of partisan defeat, and the exultation of partisan triumph should be supplanted by an ungrudging acquiescence in the popular will and a sober, conscientious concern for the general weal.

But he who takes the oath today to preserve, protect, and defend the Constitution of the United States only assumes the solemn obligation which every patriotic citizen--on the farm, in the workshop, in the busy marts of trade, and everywhere--should share with him. The Constitution which prescribes his oath, my countrymen, is yours; the Government you have chosen him to administer for a time is yours; the suffrage which executes the will of freemen is yours; the laws and the entire scheme of our civil rule, from the town meeting to the State capitals and the national capital, is yours.

Every citizen owes to the country a vigilant watch and close scrutiny of its public servants and a fair and reasonable estimate of their fidelity and usefulness. Thus is the people's will impressed upon the whole framework of our civil polity—municipal, State, and Federal; and this is the price of our liberty and the inspiration of our faith in the Republic.

Find out more about Grover Cleveland.