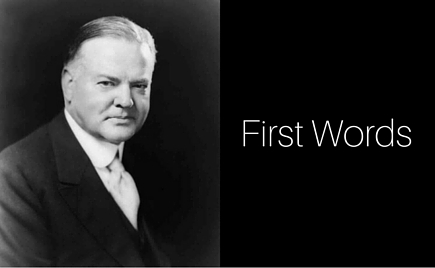 A former mining engineer who had worked all over the world, Herbert Hoover had never held elective office before his run for the presidency. Business success, prominent public roles during World War One, and a long tenure as secretary of commerce in the Harding and Coolidge administrations, however, made him the leading candidate for the 1928 Republican presidential nomination.

Hoover promised vigorous enforcement of Prohibition, and Republicans portrayed him as an efficient engineer, skilled administrator, and careful businessman in a risk-free campaign against New York Governor Al Smith, a Roman Catholic who suffered from vicious rumors and openly anti-Catholic rhetoric. A prosperous economy masked several fundamental weaknesses that would ultimately lead to the Great Depression, and Hoover won the election easily, amassing 444 electoral votes to Smith’s 87.

Hoover’s inaugural address opened and closed with marked displays of optimism. Four years later, the country deep in the grip of depression, he left office, his name associated with economic collapse.

What America has done has given renewed hope and courage to all who have faith in government by the people. In the large view, we have reached a higher degree of comfort and security than ever existed before in the history of the world. Through liberation from widespread poverty we have reached a higher degree of individual freedom than ever before. The devotion to and concern for our institutions are deep and sincere.

There would be little traffic in illegal liquor if only criminals patronized it. We must awake to the fact that this patronage from large numbers of law-abiding citizens is supplying the rewards and stimulating crime.

The election has again confirmed the determination of the American people that regulation of private enterprise and not government ownership or operation is the course rightly to be pursued in our relation to business. In recent years we have established a differentiation in the whole method of business regulation between the industries which produce and distribute commodities on the one hand and public utilities on the other. In the former, our laws insist upon effective competition; in the latter, because we substantially confer a monopoly by limiting competition, we must regulate their services and rates. The rigid enforcement of the laws applicable to both groups is the very base of equal opportunity and freedom from domination for all our people, and it is just as essential for the stability and prosperity of business itself as for the protection of the public at large.

Self-government does not and should not imply the use of political agencies alone. Progress is born of cooperation in the community—not from governmental restraints. The government should assist and encourage these movements of collective self-help by itself cooperating with them.

In our form of democracy, the expression of the popular will can be effected only through the instrumentality of political parties. We maintain party government not to promote intolerant partisanship but because opportunity must be given for expression of the popular will, and organization provided for the execution of its mandates and for accountability of government to the people.

Find out more about Herbert Hoover.