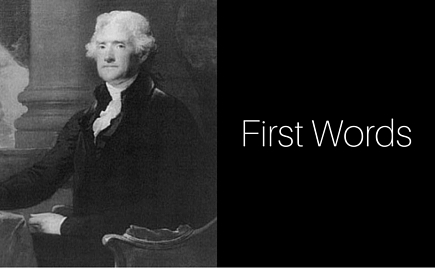 Thomas Jefferson sought—and won—the presidency in a political atmosphere of undeclared war. The campaign of 1800 between Jefferson and incumbent John Adams, reached a level of personal animosity seldom equaled in American politics.

Federalists attacked the fifty-seven-year-old Jefferson as a godless Jacobin who would unleash the forces of bloody terror upon the land. With Jefferson as President, warned one newspaper, "Murder, robbery, rape, adultery, and incest will be openly taught and practiced, the air will be rent with the cries of the distressed, the soil will be soaked with blood, and the nation black with crimes."

Adams, for his part, endured the publicizing of a private letter in which fellow Federalist Hamilton described him as having “great and intrinsic defects in his character.” The leak fueled attacks by Jeffersonian Democratic-Republicans that Adams was a hypocritical fool and a tyrant who planned to create an American monarchy by marring one of his sons to a daughter of King George III.

After he ultimately became president, in a close election eventually decided in the U.S. Congress, Jefferson urged national unity. Four years later, after a period of relative peace and prosperity, he enjoyed a second term thanks to a landslide victory. The Federalists, largely victim of the internecine feud between Adams and Hamilton, never returned to power.

Let us, then, fellow-citizens, unite with one heart and one mind. Let us restore to social intercourse that harmony and affection without which liberty and even life itself are but dreary things. And let us reflect that, having banished from our land that religious intolerance under which mankind so long bled and suffered, we have yet gained little if we countenance a political intolerance as despotic, as wicked, and capable of as bitter and bloody persecutions.

But every difference of opinion is not a difference of principle. We have called by different names brethren of the same principle. We are all Republicans, we are all Federalists. If there be any among us who would wish to dissolve this Union or to change its republican form, let them stand undisturbed as monuments of the safety with which error of opinion may be tolerated where reason is left free to combat it

[W]ith all these blessings, what more is necessary to make us a happy and a prosperous people? Still one thing more, fellow-citizens -- a wise and frugal Government, which shall restrain men from injuring one another, shall leave them otherwise free to regulate their own pursuits of industry and improvement, and shall not take from the mouth of labor the bread it has earned. This is the sum of good government, and this is necessary to close the circle of our felicities.

I shall often go wrong through defect of judgment. When right, I shall often be thought wrong by those whose positions will not command a view of the whole ground. I ask your indulgence for my own errors, which will never be intentional, and your support against the errors of others, who may condemn what they would not if seen in all its parts.

Find out more about Thomas Jefferson.