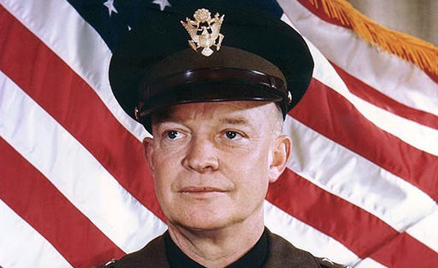 In 2016, voters and analysts talked about the importance of pre-White House experience and speculate that military experience would provide an advantage in national security issues. The “General” Election is a four-part blog series examining how George Washington, Zachary Taylor, Ulysses S. Grant, and Dwight Eisenhower, all career generals, won the presidency and how effective they were once in office.

In 1952, the Republicans were desperate for a win. The last time they won the presidency was in 1928 with Herbert Hoover. When Eisenhower entered the political landscape, both parties wanted to draft him, knowing that generals and war heroes like Washington, Taylor, and Grant, won elections.

Like past generals, Eisenhower did not actively seek the presidency at first, but supporters urged him to run. Also, like Generals Grant and Taylor, Eisenhower did not have political experience and never held elected office. Akin to all three generals, Ike presented himself as being above politics, as military code prevented him from engaging in any political activity. It also helped that he was in France as commander of NATO forces in 1951, away from the early nomination fight. The fact he was general of the army that won World War II and a political “outsider” would later help him win votes.

Similar to General Taylor, Eisenhower’s party affiliation was unclear. It was not until January 1952 that Ike announced he was a Republican although he announced it through Henry Cabot Lodge, Jr. Eisenhower had to fight a tough opponent, Senator Robert Taft, for the nomination. Taft was a Washington, D.C., insider, whose world-view Ike thought was wrong. Eisenhower’s campaign team outmaneuvered Taft at the convention to help Ike win the nomination.

For the campaign, Eisenhower did get into politics. He campaigned on bringing integrity to government, balancing the budget, decentralizing the federal government, and ending the Korean War. Adlai Stevenson attacked Eisenhower, and President Truman got into the fight by saying the former general was too inexperienced for the presidency. In return, Ike stepped up his attacks.

Once in office, Eisenhower made a big impact on national security, the biggest of all four generals. The modern presidency was part of the reason, but his vast experience was the other. Washington did not have much foreign policy experience. Taylor fought a foreign war, but he did not have a wartime allied coalition. Grant fought a civil war, but Eisenhower ran a global war, managed a large bureaucracy, and brought experience in dealing with world leaders. He applied his military organization to the White House, even creating the modern chief of staff position and developing the National Security Council to name just a couple of examples. Like his predecessors, Ike realized that he had to bring politically experienced people into his administration, such as Herbert Brownell as his attorney general, and John Foster Dulles as his secretary of state. Ike and Dulles made an effective foreign policy team.

TAKEAWAY: Eisenhower was a war hero, the likes not seen since Grant. Eisenhower’s hero was George Washington to whom duty and decency were vital, and voters trusted Ike. However, like all past generals who became president, Eisenhower struggled with partisan politics. We should not take away the fact that Ike’s impact on national security was important, but his party leadership was ineffective. As a candidate for president in 1968, his vice president, Richard Nixon, would show more of a balance between national security and partisan politics experience.