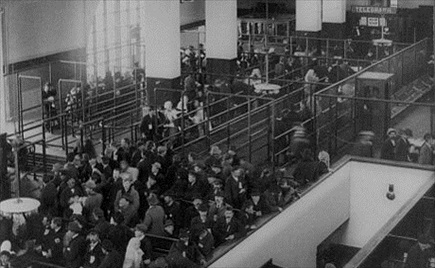 Immigration is a major issue both in the 2016 presidential campaign and the recent Brexit vote in the United Kingdom. As the next president figures out his/her approach to immigration reform, it is important to consider the discriminatory underpinnings of our country’s immigration laws.

The precedent for immigration restriction was already set with Chinese and Japanese immigrants in the 19th century; for example, the Chinese Exclusion Act, passed in 1882, barred Chinese labor immigration to the United States for a time. As the 1920 election approached, there was support for some kind of broader law that restricted immigration. Continuing immigration from southeastern Europe, a recession, the Red Scare, and labor conflicts in which immigrants were associated with anarchism all helped put xenophobic fears into the electorate.

Warren Harding campaigned on a theme of “America First,” and he supported restrictive measures. A leading congressman on immigration was Albert Johnson (R-WA), a rabid nativist. Johnson had connections with eugenists as well.

In the first year of Harding’s term, Congress introduced three deportation bills, one of them attempting to prohibit all immigration until 1930. Congress ultimately passed the Emergency Quota Act, and the president signed it. This quota system favored the northern European countries over countries in eastern and southern Europe and outside of Europe by setting an annual cap of 3 percent of a country’s residents living in the United States as of the 1910 census.

After Harding unexpectedly died and Calvin Coolidge became president, Coolidge included immigration in his first address to Congress. The new president wrote: “New arrivals should be limited to our capacity to absorb them into the ranks of good citizenship. America must be kept American. For this purpose, it is necessary to continue a policy of restricted immigration. It would be well to make such immigration of a selective nature with some inspection at the source, and based either on a prior census or upon the record of naturalization. Either method would insure the admission of those with the largest capacity and best intention of becoming citizens.”

The 1921 law was set to expire in 1924, so Congress passed the Immigration Act of 1924 (the Johnson-Reed Act) with sweeping majorities. The law favored even fewer immigrants from southeastern Europe, lowering the cap to 2 percent. However, the quota focused on European immigrants, and the law did allow unlimited immigration from the Western Hemisphere. Overall, immigration based on national origins was becoming the primary method to set larger immigration policy.

Through these laws, scholars have looked into how prejudice, genetics, and eugenics have played a role in controlling immigration in favor of “racially superior” northern Europeans. To explore this issue, try Desmond King’s Making Americans: Immigration, Race, and the Origins of the Diverse Democracy (Harvard, 2000).