J. Stephen Morrison, a veteran diplomat, noted Africanist,  and expert on international public health, has been appointed as the next James R. Schlesinger Distinguished Professor at the Miller Center for Public Affairs at the University of Virginia.

Morrison, a senior vice president at the Center for Strategic and International Studies (CSIS) in Washington D.C., founded and directs its Global Health Policy Center. A political scientist, he has built at CSIS over the past two decades a highly dynamic and impactful program that concentrates on the geopolitical and national security dimensions of U.S. leadership in international health.

“It’s an honor for me to welcome this farsighted American public intellectual and public servant to the Miller Center," said William Antholis, Director and CEO. “Stephen is a widely respected health policy expert, a veteran diplomat, an exceptional thinker and writer, and a genuinely fine person who enjoys engaging with students and faculty alike. I’ve had the pleasure of working with Steve at the State Department over two decades ago, and his career has only gone on to greater heights. Secretary Schlesinger would have been proud that we have attracted someone of this caliber, who has been studying the exact kinds of global challenges that already have begun to define the 21st century."

Through a series of high-level commissions which he has created and directed, Morrison has spearheaded work that has shaped concrete decisions in Congress and the administration on infectious diseases, especially HIV/AIDS, malaria, and tuberculosis; reproductive health and gender equality; immunizations; and health security, including pandemic preparedness, acceleration of technological innovations, and coping with anti-science and a polluted digital world. In the course of 2020, he established himself as a widely-cited thought-leader on the coronavirus pandemic.

For the past three years (and again in 2021), he has led global health security fora at the annual Munich Security Conference. In recent years he has also directed and produced documentary films, most notably The New Barbarianism, an award-winning examination of the surge of violence against the health sector, with original footage from Syria, Yemen, and Afghanistan. He is currently completing a five-part docu-series, The Pandemic Paradox: HIV on the Edge, a critical look at sustaining progress against this 40-year old pandemic, in the midst now of Covid-19. In 2020, his podcast series, Coronavirus Crisis Update, featured more than 70 episodes with a highly diverse array of prominent leaders.

Morrison currently leads the CSIS Commission on Strengthening America’s Health Security, focused on restoring U.S. global leadership in the Covid-19 era and addressing vaccine nationalism, geostrategic competition with China, Russia and others, and the looming gap in vaccine access in low- and middle-income countries. Over the course of the year, the commission will issue new recommendations on U.S. diplomatic capacities and long-range U.S. health security strategy, options to mitigate fiscal insolvency in the developing world, reform of the Centers for Disease Prevention and Control (CDC), and the future contributions of the Department of Defense. Together with Professor Heidi Larson of the London School of Hygiene and Tropical Medicine, he co-chairs the CSIS High-Level Panel on Vaccine Confidence and Misinformation, which is charged with developing concrete measure to reverse the decline in Americans’ trust in science and vaccines.

Morrison’s many years of health work at CSIS overlaps with his tenure as Director of the CSIS Africa program, (2000–2008.) Prior to that, he served in the Clinton Administration from 1993-2000 as one of the founders of USAID’s Office of Transition Initiatives and as a member of the secretary of state’s policy planning staff. He worked in the U.S. embassy in Addis Ababa, Ethiopia (1992–1993) and was senior professional staff at the House Foreign Affairs Subcommittee on Africa (1987–1991).

Morrison received his PhD in political science from the University of Wisconsin-Madison (1987) and is a magna cum laude graduate of Yale College (1978). He taught for 12 years as an adjunct professor at the Johns Hopkins School of Advanced International Studies (1994–2006). Currently he is a senior faculty fellow at the Johns Hopkins University Bloomberg School of Public Health and a member of the advisory board of the University of Wisconsin International Division. Between 2016 and 2019, he served on the advisory board of the National Institute of Health’s Fogarty International Center. He is a member of the Council on Foreign Relations and the American Academy of Diplomacy.

As the Schlesinger Professor over the 2021–22 academic year, Morrison will participate in Miller Center conferences and events; engage with faculty and students across the University of Virginia at the Batten School of Leadership and Public Policy, the Law School, and the History and Politics Departments; and contribute to the millercenter.org website and other Miller Center publications.

The University of Virginia established the James R. Schlesinger Distinguished Professorship at the Miller Center in 2007 to bring public servants of great distinction to the University. Schlesinger served as secretary of defense and secretary of energy, in addition to holding leadership roles with the Central Intelligence Agency, Atomic Energy Commission, and numerous other government bodies during a distinguished career in public service.

Building on Schlesinger’s interest in strategic matters, the Schlesinger Professorship provides a unique opportunity for public servants who have experience with foreign policy and national security to participate as visiting faculty in programs at the Miller Center and engage with students at the University. 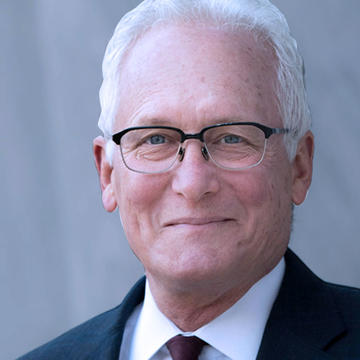 J. Stephen Morrison is a senior vice president at the Center for Strategic and International Studies (CSIS) in Washington D.C., where he founded and directs its Global Health Policy Center. Morrison has spearheaded work on HIV/AIDS, malaria, tuberculosis, reproductive health and gender equality, immunizations, and health security, including pandemic preparedness, acceleration of technological innovations, and coping with anti-science and a polluted digital world. The ongoing CSIS Commission on Strengthening America’s Health Security is addressing the consequences of Covid-19 and how U.S. leadership can confront future pandemic threats. For several years, Morrison has led global health security fora at the annual Munich Security Conference. He has also directed and produced several documentary films.