President Clinton and the Federal Reserve

President Clinton and the Federal Reserve

Presidents have long had an uneasy relationship with the Federal Reserve. This tension is easy to understand: The Fed’s ability to control interest rates can have a profound impact on the American economy, whose performance is one of the main indicators Americans consider when making judgments about the president’s ability to lead.

However, the independence of the Fed is normally taken as a given in American politics—meaning that the White House has usually found it necessary not to be too explicit in criticizing the Fed for increases in interest rates, thereby adding costs to borrowers across the nation for such things as credit card bills and home mortgages. Since it appears inevitable in the years ahead that there will be substantial interest rate hikes, close observers are no doubt wondering whether President Donald Trump will suffer in silence—or at least in private—as his predecessors usually have.

In the Miller Center’s oral history interviews with former officials from Bill Clinton’s administration, these tensions occasionally surfaced. Clinton and his economic team had paid very careful attention, when crafting their landmark 1993 economic plan, to how a demonstrated commitment to deficit reduction might influence favorably interest rates—which it did. But soon thereafter, when the Fed, under the leadership of Alan Greenspan, began to increase rates to account for early signs of economic growth, Clinton chafed. In keeping with the norms of the Oval Office, however, he grumbled privately—intent, as his advisors note, in not undermining the integrity of the Fed’s independence.

Here are two relevant oral history excerpts, one from Princeton economist and former member of the Council of Economic Advisors, Alan Blinder, and the second from Alice Rivlin, then deputy director of the Office of Management and Budget.

Q: In February 1994, interest rates started going up and . . . you get a picture of a President who is highly aggravated, purple. Can you tell us about that?

Blinder:  Oh, yes, he had a very simple attitude. Now remember, [when we were crafting that initial 1993 economic plan] I had told him that he was betting his Presidency on either the Fed being cooperative with interest rates or the bond market rallying. We had the bond market rally, so we had this tremendous success brewing. Secondly . . . he may have had reassuring discussions with Greenspan. [Greenspan] may or may not have said, “Do this thing to the budget deficit, and I’ll cooperate.” I don’t know if that ever happened. Some people think it happened. Greenspan knows and Clinton knows if it happened.

Everything is going really swimmingly well by February 1994. And one day, Bill Clinton gets, to him, blindsided—although in fact the move was well telegraphed by Greenspan. But Clinton’s not a Fed watcher. He’s got other things on his mind. He gets blindsided by Greenspan raising interest rates. “Why did he do that? Everything’s working out great.” He couldn’t understand it. He was totally enraged, and a bunch of us went in to him probably more than once to try to explain what the Fed was doing. We said, “It isn’t so bad, it isn’t going to kill the recovery. There’s a reason, interest rates were abnormally low.” They couldn’t stay that low, and we sort of calmed him down.

Then that got repeated with the next interest rate hike. Every time Greenspan raised interest rates, Clinton raged inside the White House. But to his everlasting credit, this just shows how smart he was, this was all private. He never made a peep publicly that he was angry at the Fed, or in any way hinted that he was trying to jawbone the Fed. And he didn’t, to my knowledge, ever pick up the phone and scream at Alan Greenspan. If that ever happened, I didn’t know about it. And I think I probably would have known about it.

He was smart enough to take the advice he was getting from all of us—from [economic advisor Robert] Rubin, from me, from everybody—that a President who picks a fight with the Fed is likely to lose. There’s very little up-side and a lot of down side to that. I was the one who told him back in Little Rock [during the transition]—he didn’t like this—that in terms of economic policy he had just been elected to the second most powerful position in America. This was news to the Governor of Arkansas. He didn’t like it because it was a hard job to get elected, and to think he was now second fiddle to Alan Greenspan didn’t sit well. But I think he remembered that, and he listened to the counsel of Rubin and myself and others who said, “Just hands off the Fed.” Our mantra was “We don’t comment on the Fed, we don’t comment on the Fed.” “What do you have to say about the Fed?” “We don’t comment on the Fed.” We were very disciplined that way, and so was Clinton. Clinton kept to that discipline. So he never went external, but he was really mad.

Q: Talk a little bit about White House-Fed relations during the time you were in the Clinton administration.

Alice Rivlin: Sure. We really do have an independent central bank, and the central bank guards its independence jealously. Presidents sometimes get antsy that the Fed isn’t doing what they’d like them to. Clinton was a little antsy in ’94 because the Fed was in interest rate raising mode at that point, and no President ever likes that. The economic team was restraining him from saying anything. We kept explaining that it was not a good idea to criticize Alan Greenspan, because that’s not what Presidents are supposed to do. It’s important to have an independent central bank. Clinton would mutter a bit.

I remember one very funny incident while I was still at the White House, probably ’95. Greenspan was coming over, as he periodically did. The President would invite him to come over and say, “What do you think about the economy?” and Alan would talk a little bit. So Greenspan was coming over, and we were going to have this meeting in the Oval Office. We were sitting there in the Oval Office waiting for Greenspan. The President got started on how Greenspan was such an inflation hawk, and he began mimicking Greenspan, making a speech about the deficit and inflation. We were all cracking up because he was very funny. I remember just sitting there looking a little nervously at the door because I knew that Greenspan was probably waiting in the outer office. Those doors of the Oval Office are very thick, and they are soundproof. But we were all just in hysterics at the President’s mimicking Greenspan. Then eventually he walks in, and we have to keep straight faces.

But there was, in my experience, not much more than ceremonial interchange of that sort, and similarly [that remained true] when I got [appointed] over to the Fed [myself]. 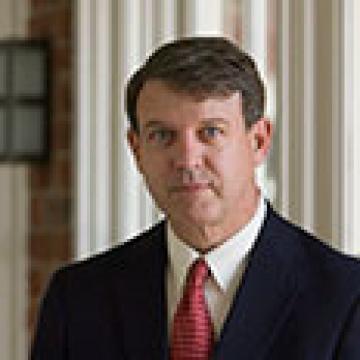 Russell Riley is associate professor and co-chair of the Miller Center’s Presidential Oral History Program. He is one of the nation’s foremost authorities on elite oral history interviewing and on the contemporary American presidency.