Contrary to the predictions of nearly all U.S. and European observers, nothing dramatic emerged from Russian President Vladimir Putin’s Victory Day speech on Red Square on May 9 concerning the Russian war in Ukraine: He did not declare victory or formal war; he did not announce a mass mobilization of Russian society; he did not repeat earlier veiled nuclear threats; neither did he indicate any diplomatic way forward. This absence of the dramatic is actually quite dramatic in itself.

In a brief speech less than 10 minutes in duration, Putin struck a sober tone, acknowledging significant Russian losses in its “special military operation” in Ukraine, now in its 11th week, and indicating no path forward on either the military or diplomatic tracks. He never mentioned Ukraine by name but neither did he pronounce the term Novorossiya (New Russia) that he has in the past invoked to legitimize (in Russians’ eyes) the absorption of all of southeastern Ukraine into Russia.  At the same time, Putin did refer to the United States and NATO and even the alliance between the Soviet Union and the United States and Great Britain during the Second World War: the former by way of justifying his decision for war because of their putative refusal to consider Russian negotiating terms of late 2021 for European security; the latter as a reference to the benefits that could be accrued from security collaboration among Moscow, Washington, London, and their allies.

Putin’s specific references to the ongoing war were limited to the “Donbass” (Donetsk Basin) region of far eastern Ukraine; and while he mentioned alleged “neo-Nazi” influences in the Ukrainian government, Putin avoided calling for regime change in Kyiv.

In our judgment, Putin’s remarks, while in no way indicating a rejection of the premises for beginning the war in the first place, do reflect a much-subdued Russian reevaluation of the prospects for Russian “victory.” They imply a dramatically reduced scope of Russian objectives and a possible willingness to negotiate a settlement on the basis, but not limited to, the status quo ante bellum. Of course, this reevaluation in Moscow, such as it is, is fundamentally the byproduct of the military facts on the ground, i.e., that while Moscow can destroy much of what it wants in Ukraine, it has not the material power to destroy Ukrainian capacity to resist Russia or the moral power to govern significant parts of the Ukraine—even in the allegedly pro-Russian east—either directly or indirectly. At the same time, it remains most unlikely that Ukraine’s armed forces, however much they may be reinforced by the impressive Lend-Lease-type aid program now coming from NATO countries, can remove Russian forces from all of Ukrainian soil, including Crimea, by force of arms alone.

Based in part on Putin’s remarks, we outline terms of a possible settlement below. Consider, first, the chief substantive points that Putin made in his “Victory Day” speech.

Based on the totality of these statements, and on the political-military context in which they were pronounced, we draw the following conclusions regarding the prospects for a settlement of the war:

This is necessarily a tentative and uncertain analysis. But to the extent that Putin’s unexpected sobriety in his “Victory Day” speech hints at an unexpected willingness to reevaluate Russia’s course in the war, it would be irresponsible not to explore the possibilities for movement from this status quo horribilis. 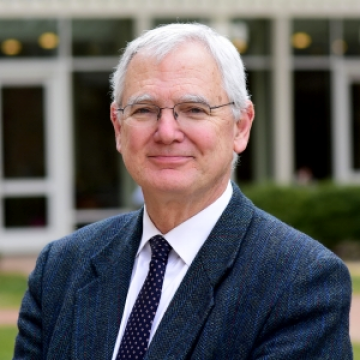 Allen Lynch’s current research interests include Russian foreign policy, Russian politics in comparative perspective, and relationships between international order and political development. In 2006, he received an All-University Teaching Award. In 1997, he received the Kleinhans Award for Distinguished Service to the School of Continuing Education. At UVA, he has held both the White Burkett Miller Chair in Public Policy (1992–94) and the Cummings Memorial Chair in International Affairs (2002–08). He is an Honorary Fellow of the Foreign Policy Association. Between 1988 and 2012 he was executive vice president of the Feris Foundation of America, which is devoted to doctoral research in international studies, disbursing more than $2 million in international doctoral fellowships during that period.