Miller Center donors discuss their involvement in the Center 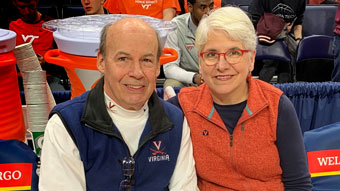 HOW LONG HAVE YOU BEEN INVOLVED WITH THE MILLER CENTER?

Three years, beginning when we retired to Charlottesville from Portland, Oregon.

WHAT FIRST DREW YOU TO THE WORK OF THE MILLER CENTER?

KIP: When we were in Portland, I joined the board of the World Affairs Council, whose mission was education on global affairs. When we came to Charlottesville, I was looking to replicate that experience. I wanted something interactive and personal, where I could keep learning. The Miller Center offers that. And the fact that the Center attracts speakers from D.C. and elsewhere—that’s a plus for us. It’s access that we’d normally have only through television.

ELIZABETH: We’d also seen some of the Miller Center’s work on C-SPAN. And the Center’s connection with Jim Lehrer [a board member and legendary journalist who passed away earlier this year] was also appealing. And we’re drawn to the Center’s commitment to be nonpartisan.

The Center’s work to challenge the political system and analyze the presidency is also so important, especially during a crisis like we’ve had this year.

WHY HAVE YOU REMAINED LOYAL SUPPORTERS?

KIP: We go to as many Miller Center events as possible. It’s important to us that the Center organizes and provides these lectures, interviews, and symposia at no charge for the community and students. We want to support that. The Center’s work to challenge the political system and analyze the presidency is also so important, especially during a crisis like we’ve had this year.

ELIZABETH: Yes, it was terrific that the Miller Center continued lectures, even though everything had to be done remotely. We still get a lot out of the online webinars and appreciate the efforts to keep programming going. 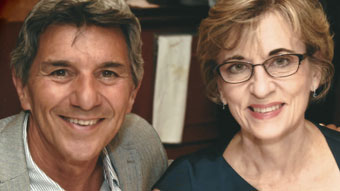 HOW LONG HAVE YOU BEEN INVOLVED WITH THE MILLER CENTER?

Shortly after we moved to Charlottesville from rural central Pennsylvania in 1999, I read about these free Friday morning discussions at the Miller Center. I went to one, with former Miller Center director Ken Thompson serving as moderator. The featured speaker would sit among the group, at the head of the large table in the center of the room, and all the guests scattered around. After the presentation, Ken opened the discussion. I went regularly each time I could. So when the Miller Center’s giving society, the Presidential Cabinet, was first started, we decided this was a cause we loved. And we have been members of the Cabinet every year since.

The opportunity for public presentation and discussion is just so cool!

WHY HAVE YOU DECIDED TO REMAIN LOYAL SUPPORTERS?

The opportunity for public presentation and discussion is just so cool! These are folks with fantastic back-grounds and experiences, with research, authorship, expertise. I have been blown away by the opportunity to sit with them and hear various viewpoints. As part of the Presidential Cabinet, we were invited to grand events—dinners, lunches, receptions, tapings, debates, etc.—over the years. These were people and places I had only dreamed about knowing and experiencing.  This had a major impact. We felt like we were part of  the “Miller Center family.”

WHAT ASPECT OF THE MILLER CENTER’S WORK IS MOST IMPORTANT TO YOU?

We’ve always loved public policy. And to be at the heart of the Center’s mission, as observer or participant, means so much. The Center’s research, special projects, presentations, and its role in informing the public and accepting input and analysis, is really vital these days. We are thrilled to be part of the endeavor, even in just a small way. 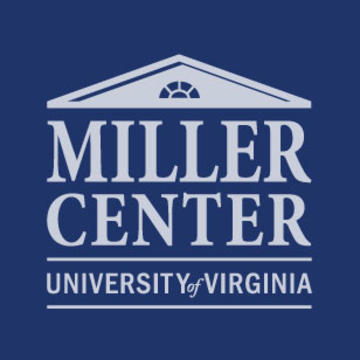 Find out more about the Miller Center's Presidential Cabinet