Is the war in Ukraine the fault of the West?

Is the war in Ukraine the fault of the West?

A thesis is ricocheting around the world that the Russian war on Ukraine is really the fault of the United States and the West. I don’t mean the fable propagated by Russia that Ukraine is ruled by Nazis doing the bidding of the Americans. I mean the more measured, academically respectable claim that in attacking Ukraine, Russia is really only reacting to a sustained and misbegotten policy by the Western countries since the 1990s: the eastward expansion of NATO. The chief proponent of the “blame the West” thesis is John Mearsheimer, an A-list international relations scholar at the University of Chicago and the high priest of the school of thought called realism. Mearsheimer’s 2014 Foreign Affairs article “Why Ukraine Is the West’s Fault,” which followed hard on Russia’s annexation of Crimea, is enjoying countless hits. His video lecture of a similar title has nearly 22 million views as of this writing. In late January, Mearsheimer’s fellow A-lister, Harvard’s Stephen Walt, blamed the crisis on Western “hubris, wishful thinking, and liberal idealism.” (Full disclosure: Walt taught me in a graduate seminar many years ago, and both scholars are long-time mentors of mine.)

Although Putin’s invasion of Ukraine certainly is a reaction to NATO expansion, it won’t do to say that the war is therefore the West’s fault. The flaw in the thinking of Mearsheimer, Walt, and other academic realists is that they present an inconsistent view of how international relations works. Mearsheimer, for example, is no more entitled to say that the West caused the war by expanding NATO than he is to say that Russia caused the West to expand NATO by being weak. A fuller explanation for the war takes into account the ideological differences between authoritarian Russia and the democratic West.

Although Putin’s invasion of Ukraine certainly is a reaction to NATO expansion, it won’t do to say that the war is therefore the West’s fault.

The argument of Walt, Mearsheimer, and many other academics goes like this: Geography makes Russia permanently vulnerable to invasion from the west, and indeed Western powers often have invaded it – most famously in 1812, when Napoleon’s armies made it to Moscow, and 1941, when Hitler’s troops ravaged vast territories and besieged Leningrad (now St. Petersburg). Today, the United States, at the head of NATO, is the threat. Since the collapse of the Soviet Union in 1991, NATO has taken in 14 members, all either former Soviet allies or republics within the Soviet Union itself: Poland, the Czech Republic, and Hungary in 1999; Estonia, Latvia, Lithuania, Slovakia, Romania, Bulgaria, and Slovenia in 2004; Croatia and Albania in 2009; Montenegro in 2017; and North Macedonia in 2020. And in 2008, then-President George W. Bush announced his “strong support” for membership for two more former Soviet republics: Georgia and, yes, Ukraine. In 2014, a revolution ousted Ukraine’s pro-Russian government and installed a pro-Western one in its place. All during these years, Russia has repeatedly and consistently warned that it would regard Ukraine’s membership in NATO as a dire threat to its security. Its 2014 invasion and annexation of Ukraine’s Crimea region made clear that Russia was not bluffing.

This account is fine as far as it goes. NATO enlargement has steadily expanded U.S. power at Russia’s expense. A look at a map makes the point clear. The closer a potential menace comes to your property, the more worried you are bound to be and the more likely you are to secure adjacent land as a buffer. But there are two problems with asserting that the current war is the West’s fault. First, the realist school of thought that grounds the argument should, on its own terms, avoid moralistic words such as “fault” and “blame.” Realism insists that it is the situation in which states find themselves, and not their dispositions (“good” or “bad”), that make them do things such as attack other countries. That is part of what makes realism compelling to so many. Second, these realist arguments fail to explain NATO expansion itself; they only are concerned with Russia’s reactions. A better explanation would account for both of these things.

Realists generally agree that “international anarchy,” or the absence of a world government to punish aggression and enforce agreements, forces states to take steps to defend themselves. Mearsheimer’s version, called offensive realism, says that the quest for security leads states to expand their power as far as is prudent. A consistent offensive realist argument would have to say that the United States agreed to take more allies in Europe because it could – because Russia was too weak to oppose it. Walt’s version of realism, called balance-of-threat theory, is more complicated: It says that states expand their power when other states become more powerful and display evidence of offensive intent. A consistent balance-of-threat explanation would say that it was a powerful and menacing Russia that produced NATO expansion. Neither version of realism can assign any moral blame to either America or NATO.

But neither Walt nor Mearsheimer applies his own theory to NATO expansion. In fact, both think their theories fail to explain it, and both appeal to a different theory. The United States and its democratic allies, they claim, are captive to liberal ideology, a jumble of ideals and wishful thinking that has propelled them into foolhardy behavior that has provoked a Russian backlash. NATO governments have deluded themselves into seeing their alliance not as the tool of American power that it is, but as a vehicle of freedom and democracy whose eastward march could only be opposed by wicked or paranoid people.

Mearsheimer and Walt have written elsewhere that the United States has been in thrall to the ideology of “liberal hegemony” since 1991. They admit, then, that the United States – the greatest of the world’s great powers, and hence the country that realism should best explain – confronts their own theory with an anomaly three decades long and counting. That is a serious problem for them. Realism also claims that the international system punishes imprudent behavior, meaning that it should discipline America for acting as if it dwells in a liberal utopia. The West, then, should correct course and behave as realism predicts. But the international system has been unaccountably merciful. Judging from the West’s unified support of Ukraine over Russia in the war, it is going to be in thrall to liberal ideology for a while longer.

Perhaps, then, we should set aside these realist theories and look to a different one that can explain both NATO expansion and Russia’s violent reaction to it.

Perhaps, then, we should set aside these realist theories and look to a different one that can explain both NATO expansion and Russia’s violent reaction to it. Elsewhere (here and here) I have argued that the deep differences between the ideologies and regimes of Russia and the United States have to be part of the explanation. America’s vast material superiority is certainly relevant, but it is the entanglement of power and ideas – the fact that NATO is an alliance of democracies and Russia is an autocracy – that alarms Vladimir Putin. Putin knows that having democracies on Russia’s border undermines his own regime and endangers his power in Russia. At the same time, it is precisely democracy that makes majorities in these Eastern European countries desire NATO and EU membership rather than an alignment with Russia. If Russia were a democracy, or the United States authoritarian, these countries would have far less reason to want to join the Western alliance.

Whose fault is the Russo-Ukrainian war, then? It is a difficult business assigning blame for such a large and complex event. But if we are going to assign blame, we should begin with Putin. Not because he fears NATO, for that is a rational fear; his power and possibly his life are indeed at stake as the alliance comes toward Russia’s border. Rather, Russia’s president-for-life stands condemned simply for being a tyrant. Over the past two decades he has steadily dragged Russia back into despotism. He did not have to do that. But he did, and that is why today the approach of democracy has driven him to brutalize Ukraine. In the end, Putin’s tyranny caused him to start this war. The fault lies not in the West, but in himself.

That does not mean that the United States should aim for regime change in Russia. Such a cure would be even worse than the disease. But it does mean that analysts who blame the West for deluded ideological thinking – who do not understand that there really is a transnational contest between democracy and authoritarianism and that it helped cause this war – are misdiagnosing the problem. 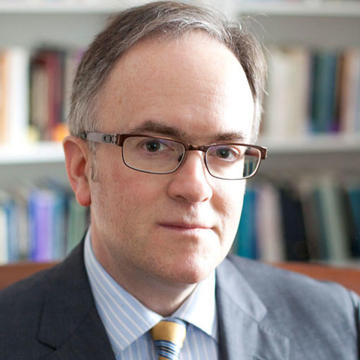 John Owen is a Miller Center faculty senior fellow and a professor in UVA's Department of Politics. He is the author of Liberal Peace, Liberal War: American Politics and International Security and The Clash of Ideas in World Politics: Transnational Networks, States, and Regime Change 1510-2010. A recipient of fellowships from Harvard, Stanford, and Princeton Universities, Owen is a member of the editorial board of International Security and a faculty fellow at the UVA Institute for Advanced Studies in Culture.