From the director: In America's governors we trust

From the director: In America's governors we trust

Originally appeared on The Hill

As hyper-partisanship, polarization, and dysfunction tighten their grip on Washington, DC, trust in our federal political institutions and our democracy itself is evaporating.

A recent Gallup poll shows only 32 percent of Americans have confidence in the institution of the presidency. Congress is even worse at 12 percent. And, whatever one says about President Trump, he surely seems intent on fanning the flames of division rather than tamping them down—including within his own party. Our political prospects are grim, and the consequences are dire.

One possible silver-lining is renewed political activism. Still, that activism seems focused on winning partisan and electoral victories, and not on addressing the entrenched polarization.

We do believe we need to give greater priority to reversing the extreme partisanship now at the core of American politics. Doing so can, in turn, restore some faith in our federal democratic institutions. We hold no illusions of a quick or easy fix. Still, we believe one important path back to deliberative democracy in Washington actually lies outside the Beltway.

Even today, governors generally are more inclined toward problem solving and bipartisanship. They need to be, as the executives in charge of managing budgets, attracting investment, and delivering key services we depend on daily—like education, health care, law enforcement, and roads.

Above and beyond delivering core services to their states, some governors recently also have banded together, across state and party lines, to take a stand on matters of national and even international policy.

On health care, many governors advised their senators whether to support the various reform proposals. And more visibly, a bipartisan group of governors united to oppose each of the successive “repeal and replace” plans—not on partisan grounds, but because the practical details were unworkable at the state level.

On energy and climate change, a surprising number of governors from both parties have begun to work with state- and province-level counterparts in India and China—many of whom oversee populations the size of major nations.

Immigration reform gets a lot of play on national cable news, but many of the most difficult decisions involve implementation at the state level. Across the nation, governors are deciding what role if any state police will play in carrying out the Trump administration’s immigration policies. States also must resolve whether to provide education and health benefits to the children of undocumented immigrants, or instead deal with the consequences of a generation of uneducated and/or untreated minors. While federal proclamations get all the headlines, in a very real way, immigration policy is being made by the states.

States also manage elections, including the maps that determine congressional districts. Following sweeping gains leading up to the 2010 census, Republicans in control of many state legislatures and statehouses redrew electoral maps to help strengthen those majorities and gain seats in Congress.

This practice, to be sure, has also been deployed by Democrats. Some argue that turnabout is fair play, but a better argument is that a fair electoral process is fundamental to democracy.

Former California Governor Arnold Schwarzenegger, for example, instituted a neutral electoral commission in California. While all eyes are on the Supreme Court’s decision whether so-called partisan gerrymandering is unconstitutional, shouldn’t we also elect governors who believe that a fair electoral process is more important than partisan gain?

Across all these areas and more, the states and their chief executives have a crucial role to play in American politics.

Even if some of this role results from dysfunction at the national level, there are good national reasons to welcome states stepping forward. Citizens logically might prefer their own state officials generating policy and delivering services—and voting out those who fail them—instead of relying entirely on politicians and bureaucrats in Washington, DC, to understand what will work best in their state.

Federalism is a long-standing American principle that began with the Framers: Despite their disagreements, Hamilton, Madison, and Jefferson all believed states should retain sovereignty and serve as laboratories for new ideas.

The experiments playing out in state laboratories today could have a profound impact on the health of American democracy. In an era where dysfunction and rancor are the norm in national politics, principled and effective gubernatorial leadership provides 50 points of light to guide a path forward.

In the meantime, many of us are asking what it is we can or should do. One answer is to support governors who are reaching across the aisle to actually solve problems and improve our lives—and to recognize their work as the type of governance our country so desperately needs.

Instead of focusing just on upcoming congressional midterm elections, let’s also invest more of our time and political philanthropy on state races. Let’s fill our state legislatures and governor ranks with our best and brightest leaders. And in time, let’s hope they not only succeed there, but also bring results-oriented, bipartisan playbooks to the halls of Congress and the White House.

Mike Hirshland clerked for U.S. Supreme Court Justice Anthony Kennedy, was Counsel to the U.S. Senate Judiciary Committee, and is the co-founder of Resolute Ventures.

William Antholis is director and CEO of the University of Virginia’s non-partisan Miller Center, which has worked with administrations of both parties for more than 40 years, and recently has been studying presidential First Years.

Read it on The Hill 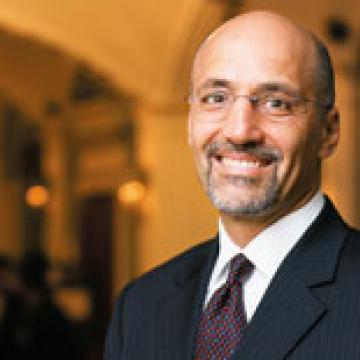 Antholis is Director and CEO of the Miller Center.

The president's battles with his own party could not have come at a worse time.

Trump's supporters think he can't get a fair shake. Critics, on the other hand, believe our president to be a political miscreant who has crossed the line so far as to have broken the law.

Donald Trump isn't the first upstart outsider to have taken up residence in the White House.