By the Book: Calvin Coolidge

By the Book: Calvin Coolidge 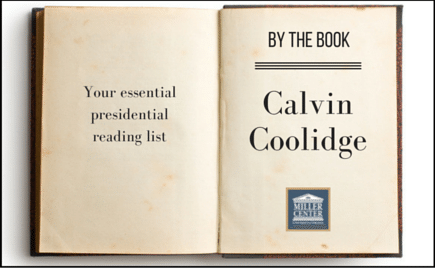 Calvin Coolidge is still underrepresented in the canon of presidents. However, readers don’t have to dig too far to find material to read about him.

Coolidge wrote his own book, The Autobiography of Calvin Coolidge, published in 1928. It gives you a good sense of his economy of words. The last 50 pages cover his presidency and it’s interesting to read about his philosophy of presidential governance.

The most recent and comprehensive biography is Amity Shlaes’ Coolidge. She asks why such a popular president in his own time has become largely forgotten.  She argues two main points: 1) he didn’t have a big personality, especially compared to Theodore Roosevelt, Franklin D. Roosevelt, John F. Kennedy, and Lyndon Johnson; 2) Coolidge’s presidency focused mainly on economics, specifically reducing the federal debt after World War I.

For the American Presidents series, David Greenberg’s Calvin Coolidge adds another important element to this discussion: Coolidge did not have much of a vision for his presidency.  In Coolidge: An American Enigma, Robert Sobel focuses more on economics, but he also writes the popular perception of Coolidge is one of being an accidental president, someone who had no agenda. Coolidge got buried under a new active presidency that started with Theodore Roosevelt and was fully realized by FDR.

These authors give us context that is forgotten in the wake of the modern presidency. Americans expected the executive branch to do something even in Coolidge’s time.  In Coolidge’s case, one example was the intervention to help victims in the South and New England in the wake of large-scale flooding.  Possibly Coolidge thought being the “great refrainer” was his vision.