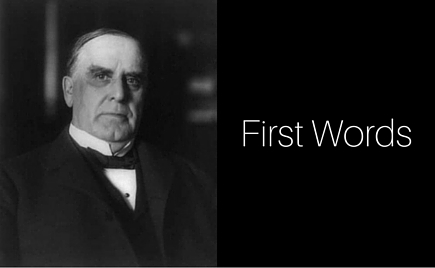 In this ongoing series, the Miller Center’s First Year Project looks at key passages from past inaugural addresses—the first words spoken by our new presidents. Today we look at William McKinley, the "Idol of Ohio," our 25th president.

When he took the oath of office, William McKinley—as would Franklin Roosevelt some 36 years hence—faced the consequences of one of America’s most devastating economic collapses, in this case the Panic of 1893. McKinley won the presidency on a platform endorsing protective tariffs and the gold standard, while leaving open the door to an international agreement on bimetallism, and in his first words as the 25th President of the United States, he addressed the security of America’s currency and the financial position of the government.

The country is suffering from industrial disturbances from which speedy relief must be had. Our financial system needs some revision; our money is all good now, but its value must not further be threatened. It should all be put upon an enduring basis, not subject to easy attack, nor its stability to doubt or dispute. Our currency should continue under the supervision of the Government. The several forms of our paper money offer, in my judgment, a constant embarrassment to the Government and a safe balance in the Treasury.

Economy is demanded in every branch of the Government at all times, but especially in periods, like the present, of depression in business and distress among the people. The severest economy must be observed in all public expenditures, and extravagance stopped wherever it is found, and prevented wherever in the future it may be developed. If the revenues are to remain as now, the only relief that can come must be from decreased expenditures.

A deficiency is inevitable so long as the expenditures of the Government exceed its receipts. It can only be met by loans or an increased revenue. While a large annual surplus of revenue may invite waste and extravagance, inadequate revenue creates distrust and undermines public and private credit. Neither should be encouraged. Between more loans and more revenue there ought to be but one opinion. We should have more revenue, and that without delay, hindrance, or postponement.

Find out more about William McKinley.