The election of 1840 solidified many of the factors Andrew Jackson had introduced into the electoral equation: politics as entertainment, the emerging political power of the West, and the increasing access of the vote to the lower classes. No candidate, before or since, has been marketed to the electorate as adroitly, totally, or deceptively. The Whigs positively inundated the populace with cheap, colorful memorabilia for the Log Cabin and Hard Cider candidate. The public embraced the image of the rugged westerner, as they would with Lincoln, Grant, Reagan, and a dozen others. Voters seemed unwilling to allow the facts to get in the way. After all, William Henry Harrison hailed from Virginia elite, lived in a mansion, freely quoted Roman historian Tacitus and famous orator Cicero, and enjoyed imported wines.

In the presidential election that year, voter turnout shot to a spectacular 80 percent, up more than twenty points from four years earlier. With such a complete contrast between the images of the two candidates, people felt very strongly about their favorite. Tens of thousands of people attended rallies in several cities in 1840, astounding numbers when the difficulties of overland travel in that era are considered.

One bitter pro-Van Buren paper lamented after his defeat, "We have been sung down, lied down and drunk down." In one sentence, this described the new American political process.

The development of two strong and competitive parties, organized by urban "machines" and county "rings" to bring voters to the polls, accounted for the development of a mass democracy in the 1830s and 1840s. Harrison's election marked the first time the Democrats had been defeated, thus institutionalizing party turnover in this second American party system. 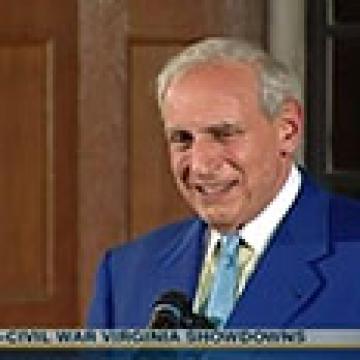