Barack Obama: Life Before the Presidency

Barack Obama: Life Before the Presidency

Barack Hussein Obama II was born on August 4, 1961, in Hawaii. His parents, who met as students at the University of Hawaii, were Ann Dunham, a white American from Kansas, and Barack Obama Sr., a black Kenyan studying in the United States. Obama's father left the family when Obama was two and, after further studies at Harvard University, returned to Kenya, where he died in an automobile accident nineteen years later. After his parents divorced, Obama's mother married another foreign student at the University of Hawaii, Lolo Soetoro of Indonesia. From age six through ten, Obama lived with his mother and stepfather in Indonesia, where he attended Catholic and Muslim schools. “I was raised as an Indonesian child and a Hawaiian child and as a black child and as a white child,” Obama later recalled. “And so what I benefited from is a multiplicity of cultures that all fed me.”

Concerned for his education, Obama’s mother sent him back to Hawaii to live with her parents, Stanley and Madelyn Dunham, and to attend Hawaii’s prestigious Punahou School from fifth grade through graduation from high school. While Obama was in school, his mother divorced Soetoro, returned to Hawaii to study cultural anthropology at the university, and then went back to Indonesia to do field research. Living with his grandparents, Obama was a good but not outstanding student at Punahou. He played varsity basketball and, as he later admitted, “dabbled in drugs and alcohol,” including marijuana and cocaine. As for religion, Obama later wrote, because his parents and grandparents were nonbelievers, “I was not raised in a religious household.”

Obama's mother, who “to the end of her life [in 1995] would proudly proclaim herself an unreconstructed liberal,” deeply admired the civil rights movement of the 1950s and 1960s and taught her son, he later wrote, that “To be black was to be the beneficiary of a great inheritance, a special destiny, glorious burdens that only we were strong enough to bear.” But, as culturally diverse as Hawaii was, its African American population was miniscule. With no father or other family members to serve as role models (his relationship with his white grandfather was difficult), Obama later reflected, “I was trying to raise myself to be a black man in America, and beyond the given of my appearance, no one around me seemed to know exactly what that meant.”

Obama left Hawaii for college, enrolling first at Occidental College in Los Angeles for his freshman and sophomore years, and then at Columbia University in New York City. He read deeply and widely about political and international affairs, graduating from Columbia with a political science major in 1983. (A movie version of his Columbia years, Barry, was released in 2016.) After spending an additional year in New York as a researcher with Business International Group, a global business consulting firm, Obama accepted an offer to work as a community organizer in Chicago's largely poor and black South Side. As biographer David Mendell notes in his 2007 book, Obama: From Promise to Power, the job gave Obama “his first deep immersion into the African American community he had longed to both understand and belong to.”

Obama's main assignment as an organizer was to launch the church-funded Developing Communities Project and, in particular, to organize residents of Altgeld Gardens to pressure Chicago's city hall to improve conditions in the poorly maintained public housing project. His efforts met with some success, but he concluded that, faced with a complex city bureaucracy, “I just can't get things done here without a law degree.”

In 1988, Obama enrolled at Harvard Law School, where he excelled as a student, graduating magna cum laude and winning election as president of the prestigious Harvard Law Review for the academic year 1990-1991. Although Obama was a liberal, he won the election by persuading the journal’s outnumbered conservative staffers that he would treat their views fairly, which he is widely acknowledged to have done. As the first African American president in the long history of the law review, Obama drew widespread media attention and a contract from Random House to write a book about race relations. The book, Dreams from My Father: A Story of Race and Inheritance (1995), turned out to be mostly a personal memoir, focusing in particular on his struggle to come to terms with his identity as a black man raised by whites in the absence of his African father. 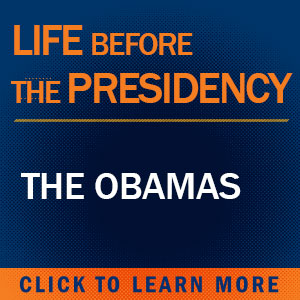 During a summer internship at Chicago’s Sidley and Austin law firm after his first year at Harvard, Obama met Michelle Robinson, a South Side native and Princeton University and Harvard Law School graduate who supervised his work at the firm. He wooed her ardently (as memorialized in another 2016 movie, Southside with You), and after a four-year courtship they married in 1992. The Obamas settled in Chicago's racially integrated, middle-class Hyde Park neighborhood, where their first daughter, Malia Ann, was born in 1998 and their second daughter, Natasha (called Sasha), was born in 2001.

After directing Illinois Project Vote, a voter registration drive aimed at increasing black turnout in the 1992 election, Obama accepted positions as an attorney with the civil rights law firm of Miner, Barnhill and Galland and as a lecturer at the University of Chicago Law School. He launched his first campaign for political office in 1996 after his district’s state senator, Alice Palmer, decided to run for Congress. With Palmer’s support, Obama announced his candidacy to replace her in the Illinois legislature. When Palmer's congressional campaign faltered, she decided to run for reelection instead. But Obama refused to withdraw from the race, successfully challenged the validity of Palmer’s voter petitions, and was easily elected after her name was kept off the ballot.

Obama’s time in the legislature initially was frustrating. Republicans controlled the state senate, and many of his black Democratic colleagues resented the hardball tactics he had employed against Palmer. But he adapted, developing cordial personal relations with legislators of both parties and cultivating Senate Democratic leader Emil Jones Jr., another African American senator from Chicago, as a mentor. Obama was able to get campaign finance reform and crime legislation enacted even when his party was in the minority, and after 2002, when the Democrats won control of the Senate, he became a leading legislator on a wide range of issues, passing nearly 300 bills aimed at helping children, old people, labor unions, and the poor.

Obama’s one serious misstep during his early political career (he later called it “an ill-considered race” in which he got “spanked” by the voters) was a 2000 Democratic primary challenge to US Representative Bobby Rush. Rush was a former Illinois Black Panther leader who subsequently entered mainstream politics as a Chicago alderman and was elected to Congress from the South Side’s first congressional district in 1992. Obama was not nearly as well known as the popular Rush, and the combination of his unusual upbringing and his association with predominantly white elite universities such as Columbia, Harvard, and Chicago aroused doubts about his authenticity as a black man among the district’s overwhelmingly African American voters. Obama suffered what he labeled “a drubbing,” losing to Rush by a 30-percentage point margin. Rush remained in the House; he was reelected to his thirteenth consecutive term in 2016.

Returning to the state senate, Obama began eyeing a 2004 race for the US Senate seat held by Peter Fitzgerald, an unpopular first-term Republican who decided not to run for reelection. In October 2002, as Congress was considering a resolution authorizing President George W. Bush to launch a war to depose the Iraqi dictator Saddam Hussein, Obama spoke at an antiwar rally in Chicago. “I don't oppose all wars,” he declared. “What I am opposed to is a dumb war. What I am opposed to is a rash war.” By speaking out against Bush’s war policies, Obama set himself apart from the other leading candidates for the Democratic Senate nomination, as well as from most Senate Democrats with presidential ambitions, including Hillary Rodham Clinton of New York, John Kerry of Massachusetts, and John Edwards of North Carolina. Obama’s initially unpopular antiwar stance eventually worked to his political advantage as the war became increasingly unpopular with the passage of time.

Advised by political consultant David Axelrod, who had a strong record of helping black candidates succeed in majority-white constituencies, Obama assembled a coalition of African Americans and white liberals to win the Democratic Senate primary with 53 percent of the vote, more than all five of his opponents combined. He then moved toward the political center to wage his general election campaign against Republican nominee Jack Ryan, an attractive candidate who, after making hundreds of millions of dollars as an investor, had left the business world to teach in an inner-city Chicago school. But Ryan was forced to drop out of the race when scandalous details about his divorce were made public, and Obama coasted to an easy victory against Ryan’s replacement on the ballot, black conservative Republican Alan Keyes. Obama won by the largest margin in the history of Senate elections in Illinois, 70 percent to 27 percent.

In addition to his election, the other highlight of 2004 for Obama was his wildly successful keynote address at the Democratic National Convention. “There’s not a liberal America and a conservative America,” he declared. “There’s a United States of America. There’s not a black America and white America and Latino America and Asian America. There’s a United States of America.” Obama encapsulated his speech’s themes of optimism and unity with the phrase, “the audacity of hope,” which he borrowed from Reverend Jeremiah Wright. Wright was the pastor of Chicago’s Trinity United Church of Christ, a large and influential black congregation where Obama was baptized when he became a Christian in 1988. Obama also used the phrase as the title of his second book, The Audacity of Hope: Thoughts on Reclaiming the American Dream (2006), which became a national bestseller in the wake of his newfound national popularity. Describing his religious conversion, Obama wrote, “I felt God’s spirit beckoning me. I submitted myself to His will, and dedicated myself to discovering His truth.”