The Campaign and Election of 1836:

Martin Van Buren worked hard to build his friendship and political alliance with President Jackson and these efforts came to fruition in 1836 when Van Buren ran as Jackson's chosen successor. In fact, it appears that Jackson and key members of the Democratic Party had rallied behind Van Buren as their candidate for 1836 as much as two years before that contest. Van Buren had little trouble securing the nomination, winning it on a unanimous, first ballot vote at the convention. Van Buren's running mate was Congressman Richard Johnson of Kentucky.

Martin Van Buren presented his candidacy as a continuation of Jackson's policies, which it was. Many voters, particularly in Democratic strongholds like Pennsylvania, Virginia, and his native New York, loved "Old Hickory" and were pleased to vote for his supposed heir. Van Buren also benefited from the Democratic party organization he had helped build over the preceding decade. The Democratic party in 1836 was disciplined and well-organized, which helped bring more Democratic voters to the polls. Indeed, Van Buren garnered almost 85,000 more votes than Jackson had in 1832.

The Whig party, though still in its infancy and not as mature organizationally or ideologically as the Democrats, did offer stiff competition. In large part, it ran against Andrew Jackson, railing against his personality—which it deemed too monarchial—and his politics—which it criticized on a variety of accounts. Van Buren, too, came in for criticism. Whigs regarded the presidential candidate as little more than a party hack and warned that Van Buren's election would only allow the Democrats to carry on their flawed policies and politics. Lacking the unity to settle on a candidate or even hold a national convention, the Whigs ran three regional candidates: Tennessee senator Hugh White in the South, Daniel Webster of Massachusetts in the East, and Ohio's William Henry Harrison in the West. (Harrison would be elected President in 1840.)

Van Buren, though, would not be denied victory in 1836; he received more votes than all three Whig candidates combined. His victory resulted from a combination of his own attractive political and personal qualities, Jackson's popularity and endorsement, the organizational power of the Democratic party, and the inability of the Whig Party—at this point—to muster an effective candidate and campaign. Nevertheless, there were signs of trouble ahead for the Democrats. They had won a smaller percentage of electoral votes in 1836 than four years prior, carrying fewer southern states and losing Georgia and Tennessee to the Whigs. Where they did win, it was by significantly smaller margins than in 1832. In other words, the political and electoral strength of the Whigs was growing. This did not portend an easy term for the new President.

The Campaign and Election of 1840

Van Buren easily won the Democratic nomination for a second term, but he and his party faced a difficult election in 1840. Van Buren's presidency had been a difficult affair, with the U.S. economy mired in a severe downturn, and other divisive issues, such as slavery, western expansion, and tensions with Great Britain, providing opportunities for Van Buren's political opponents—and even some of his fellow Democrats—to criticize his actions. Also damaging to Van Buren's re-election chances in 1840 was the growth in political strength of the Whig party and its maturation as a professional organization. Van Buren, in short, faced a difficult political battle in 1840.

The Whigs selected William Henry Harrison of Ohio as their candidate for the presidency. Hailing from a wealthy Virginia family, Harrison attended Hampden-Sydney College and then made a name for himself fighting Native Americans in the Northwest territories (what would become Ohio and Indiana.) Western, colorful, and a tall and tough warrior, the Whigs presented Harrison as the antithesis of Van Buren, whom they derided as ineffective, corrupt, and effete.

The Whigs ran a masterful campaign. They flooded the public with promotional odds and ends—sewing boxes, cigar tins, whiskey bottles, and pennants with the Whig slogan, "Tippecanoe and Tyler Too." One Whig rally drew 60,000 people to the rural site of one of Harrison's military victories, an amazing turnout at a time when travel was difficult. When a Democratic newspaper sneeringly wrote of Harrison "Give him a barrel of hard cider and settle a pension of two thousand a year on him…and take my word for it, he will sit the remainder of his days in his log cabin," the Whigs promptly anointed Harrison the "Log Cabin and Hard Cider" candidate, cementing his homespun image. It mattered little that Harrison's background, wealth, and education belied his new moniker The Whigs, for their part, attacked Van Buren mercilessly. Whig glee clubs sang "Van, Van, is a used-up man," Whig representative Charles Ogle (PA) unleashed a vicious and lurid attack from the floor of the House in April 1840 that gained national attention, and the party gave Van Buren a new nick-name: "Martin Van Ruin." Things grew even uglier when Whigs publicized the allegations which were true—that Vice President Richard Johnson had had several affairs with African American women.

Van Buren, following the political traditions of the day, did not personally campaign for the presidency. But he did monitor carefully the efforts of the Democratic Party on his behalf and he kept in close contact with his operatives in the field. Queries from citizens asking about his views on the events of the day offered Van Buren the opportunity to defend his record and embrace the Jacksonian ideals that he and the Democratic Party claimed to represent: strict adherence to the Constitution, the protection of states' rights, and a federal government of limited powers that would not usurp the power of the people. His remarks, which took the form of letters to his questioners, were often reprinted in Democratic newspapers. Van Buren remained optimistic about his chances for re-election until October 1840, by which time it became unlikely that he would defeat Harrison. An astonishing eighty percent of eligible voters went to the polls on election day. Van Buren remained close in the popular vote but Harrison crushed him in the electoral college. The president failed to carry even his home state of New York. 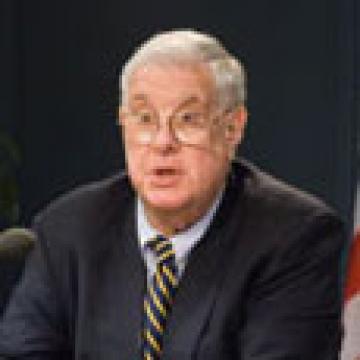